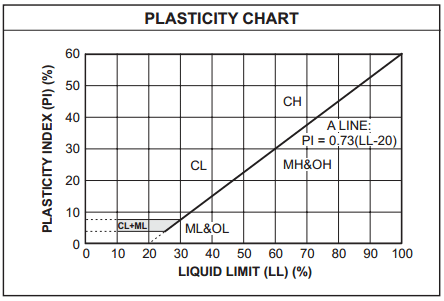 The Unified Soil Classification System is based on the airfield soil classification system developed by Casagrande during World War II. With some modification it was jointly adopted by several U.S. government agencies in 1952. Additional refinements were made and it is currently standardized as ASTM D 2487-93. It is used in the U.S. and much of the world for geotechnical work other than roads and highways (For which AASHTO Soil Classification is used). In the unified system soils are designated by a two-letter symbol: the first identifies the primary component of the soil, and the second describes its grain size or plasticity characteristics. For example, poorly graded sand is designated SP and low plasticity clay is CL. Five first-letter symbols are used:

The second letter is assigned based on whether the fines classify as clay (C) or silt (M) as described for fine-grained soils below. For sands and gravels having between 5 and 12% of the total sample passing the No. 200 sieve, both the gradation and plasticity characteristics must be evaluated and the soil is given a dual classification such as SP-SM, SP-SC, GW-GC, etc. The first symbol is always based on gradation, whereas the second is always based on plasticity. For fine-grained soils and organic soils, classification in the unified system is based on Atterberg limits determined by the fraction passing the No. 40 sieve. The liquid limit and plasticity index in the Unified Soil Classification System are determined and plotted on the plasticity chart. The vertical line at LL = 50 separates high-plasticity soils from low-plasticity soils. The A-line separates clay from silt. The equation of the A-line is

The plasticity chart has a shaded area; soils that plot in this area (above the A-line with PI values between 4 and 7) are silty clay and are given the dual symbol CL-ML. If the soil under consideration is the fines component of a dual classified sand or gravel, the soil is classified as SM-SC or GM-GC. Soils with sufficient organic contents to influence properties that have liquid limits below 50 are classified as OL; those with liquid limits above 50 are classified as OH. Soils that are predominantly organic, with visible vegetable tissue, are termed peat and given the designation Pt.