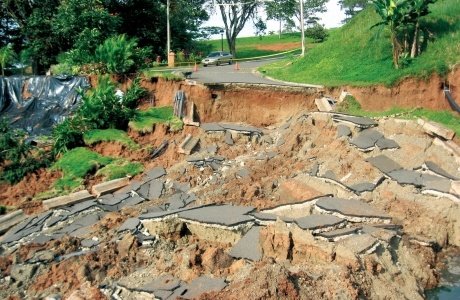 Soils derive their strength from contact between particles capable of transmitting normal as well as shear forces. The contact between soil particles is mainly due to friction and the corresponding stress between the soil grains is called the effective (or inter-granular) stress s'. 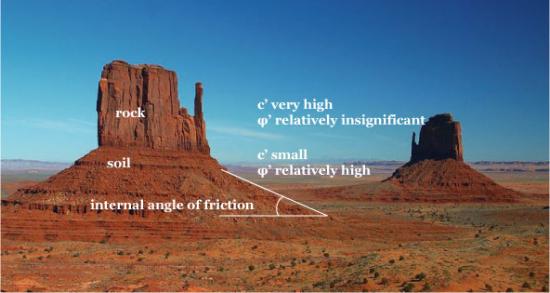 The total stress is equal to the total force per unit area acting normal to the plane. The pore water affects the physical interaction of soil particles. Soils with inactive surfaces do not absorb water, but clay particles, formed of silicates which are frequently, charged electrically, absorb water readily and exhibit plastic, shrinkage, and swelling characteristics. Besides, a change in pore pressure can directly affect the effective stress. The pore water thus influences the shear strength parameters of a soil to a considerable extent.

where, s = shear strength of soil (or shear stress at failure) on the surface under consideration,

f' = angle of internal friction (or angle of shearing resistance), and

While analyzing the stability of an embankment, the designer uses one of the two methods. These are:

There are three types of laboratory tests which are commonly used for the determination of shear strength of compacted impervious soils. These methods differ in the method of consolidating the soil sample before the sample is failed in shear. These methods are as follows:

In the undrained test (also known as the 'quick', 'unconsolidated-undrained' or 'Q' test), drainage or dissipation of pore pressure is not allowed at any stage of the test. The relationship between the shear strength and normal pressure, obtained in terms of total stress, is used in the stability analysis of an embankment dam for 'during' and 'immediately after' construction condition. The soil samples are tested at a moisture content and density which would prevail during or immediately after construction. If the moisture content corresponds to saturation level, it will be found that all soil samples (saturated) have the same shear strength if no consolidation (i.e., drainage) is allowed.

In consolidated undrained test (also known as 'consolidated-quick' or 'R' test) the sample is first allowed to consolidate (with full pore pressure dissipation) under a specified consolidation pressure, and is then failed in shear without permitting drainage. To obtain strength parameters in terms of effective stress (i.e., c' and f'), the pore pressure should be measured. These values are used for effective stress method of stability analysis. If the test values are to be used for the total stress method of stability analysis, the sample should be tested (without pore pressure measurement) at a water content which is anticipated in the dam during the period being analyzed. It should often be difficult to determine the water content which would prevail in the dam.

Hence, it is usual practice to conduct the tests on saturated samples for total stress method of analysis. The results of these tests would be useful for analyzing sudden draw-down condition of impervious zones of embankment and foundation. The test results would also be useful for analyzing the upstream slope during a partial pool condition and the downstream slope during steady seepage. Drained test (also known as the 'slow' test or 'S' test) permits drainage and complete dissipation of pore pressure at all stages of the test. The strength parameters are determined in terms of effective stress. The results of this test are to be used for freely-draining soils in which pore pressures do not develop.

In embankment sections of clean sand and gravel, the pore pressures develop primarily due to seepage flow. The changes in pore pressure on account of changes in the embankment volume are short-lived and can be neglected. Consequently, the effective stress method of stability analysis is used for sections of pervious sand and gravel. The strength characteristics of sand and gravel are determined by drained tests. Because of the limitations of the size of test equipment, it may not be possible to test gravels of larger size. The strength characteristics of such soil can safely be assumed as those obtained for finer fractions of the same soil.