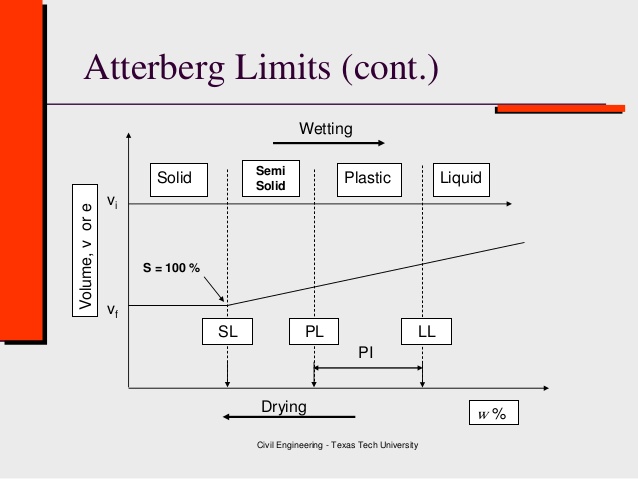 A fine-gained soil can exist in any of several states; which state depends on the amount of water in the soil system. When water is added to a dry soil, each particle is covered with a film of adsorbed water. If the addition of water is continued, the thickness of the water film on a particle increases. Increasing the thickness of the water films permits the particles to slide past one another more easily. The behavior of the soil, therefore, is related to the amount of water in the system. Approximately sixty years ago, Albert Atterberg defined the boundaries of four states in terms of "limits"  called Atterberg Limits which are as follows:

Procedure for Determination of Liquid Limit |

Procedure for Determination of Plastic Limit

These limits have since been more definitely defined by A. Casagrande as the water contents which exist under the following conditions:

The Liquid Limit, also known as the upper plastic limit, is the water content at which soil changes from the liquid state to a plastic state. OR

It is the minimum moisture content at which a soil flows upon application of very small shear force. OR

Liquid Limit (LL or wL) - the water content, in percent, of a soil at the arbitrarily defined boundary between the semi-liquid and plastic states.

The Plastic Limit, also known as the lower plastic limit, is the water content at which a soil changes from the plastic state to a semisolid state. OR

Plastic Limit (PL or wP) - the water content, in percent, of a soil at the boundary between the plastic and semi-solid states.

It is defined as the property of cohesive soil which posses the ability to undergo changes of shape without rupture or a change in volume.

Soil that do not have plastic limit are reported as being non-plastic e.g fairly clean sand, rock dust etc. Non plastic soils make excellent road materials when properly confined under wearing course .e.g. Rock dust. Even when wet they form hard, durable surface whereas clean sand displaces easily under the load. However, their use for base course or for fill brings difficult construction problems.

Plasticity Index is the range of water content over which a soil behaves plastically. It indicates the degree of plasticity of the soil. PI is the difference between the liquid limit and the plastic limit. Greater the difference, greater is the plasticity of the soil. Soils with a high PI tend to be predominantly clay, while those with a lower PI tend to be predominantly silt. Soils with high plasticity index are highly compressible. Plasticity index in also a measure of cohesiveness with high value of PI indicating high degree of cohesion. Experience shows that soils with high P.I are much less desirable for sub grade or base course than those having less indexes. For base course common specification is P.I < 3.

The Atterberg limits are found for re-moulded soil samples. These limits as such do not indicate the consistency of undisturbed soil. The index to indicate consistency of undisturbed soils is called liquidity index of the soil or Water Plasticity Ration of the soil. Its advantage is that The liquidity index (LI) is used for scaling the natural water content of a soil sample to the limits.

The curve obtained from the graph of water content against the log of blows while determining the liquid limit lies almost on a straight line and is known as the flow curve. The equation for flow curve is:

The shearing strength of clay at plastic limit is a measure of its toughness. It is the ratio of plasticity index to the flow index. It gives us an idea of the shear strength of soil.