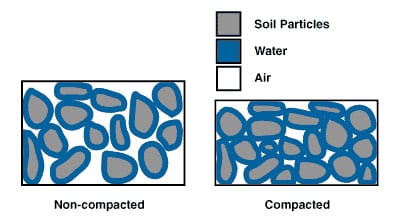 Effects of different factors on compaction of soil

Effects of Soil type on Compaction of Soil

Type of soil has a great influence on its compaction characteristics. Normally, heavy clay, clay & silt offer higher resistance to compaction where as sandy soils and coarse grained or gravelly soils can be easily compacted. The coarse grained soils yield higher densities in comparison to clay. It should also be noted that a well graded soil can be compacted to higher density.

The table below contains typical values for the different soil types obtained from the Standard Compaction Test.

Note that these are typical values. Because of the variability of soils it is not appropriate to use typical values in design, tests are always required.