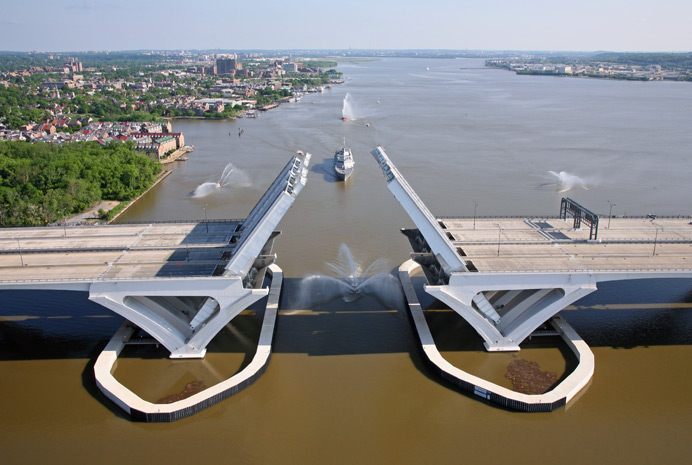 The Woodrow Wilson bridge spans the Potomac River on the outskirts of Washington DC and connects the states of Maryland and Virginia. The bridge carries the I-95, the most heavily traveled road on the East cost of the United States. The Woodrow Wilson Bridge is 6,736 feet (2,053 m) long and 70 feet (21 m) high.

The bridge was built in 1961 with 6 lanes, which proved to be congesting after 3-4 decades.

The ambitious plan was to build a monumental 12 lane super bridge, twice as wide and 20’ higher than the existing bridge. It was designed to be able to open for river traffic using a draw bridge mechanism, making it the biggest bascule bridge ever constructed in the world costing $2.5 Billion. The work was completed by 30 separate contractors and over 1000 workers. The giant draw bridge sections were fabricated in Florida and transported through sea.

Work started on the construction of this monumental bridge in 2000. The first 3 years were spent on constructing extensive foundation in the swampy areas, which were unstable and difficult to build on. The soil had to be consolidated through pile driving to enable it to carry the load of the new roads and the interchanges along a 7.5 mile construction corridor.

The Potomac River was too shallow for the construction barges to work in, so the river had to be dredged. Half a million cubic yards of dredged materials were removed in order to create a construction channel in the river. The construction methods used were all marine based. All equipment was barge supported. All the cranes, materials and supplies were barged in so the river needed to be about 30’ deep, though it was just 2' at that time.

To construct this aesthetically pleasing arch type bridge using modern materials, V-shaped piers were to be constructed to support the roadway. Unlike the typical/traditional arch bridges wherein the keystone at the top distributes all the load, the V piers are held together by horizontal concrete girders — tie beams, which resist all the forces which are trying to split the V pier in half. The V-piers are constructed out of hollow concrete segments. About 650 total precast segments were cast for the purpose. Pouring of some segments took up to 13 hours. After the concrete set, the segments were transported through barges to the site, where they were lifted on to the V-pier piece by piece.

The V-piers were made hollow to minimize weight and to have access holes for maintenance of the bridge in the future.

Construction of Steel Section / Bascule of the Bridge

Once the V-piers were complete, steel girders were laid on top to carry the roadway.

The huge crane which lifted the girders were brought in by barge. During installation of the girders, the barge was secured to the riverbed by a process known as spudding, in which a huge steel pin is drive through the bar into the sea bed. Huge care was required in the placement of girders in their required space. About 100 tons of steel girders dangling in the air also require wind and temperature considerations to be incorporated. The girders were installed on earthquake proof shock absorbers so that it could withstand earthquake catastrophes.

The girder joints were welded using an automated tractor device. Because of the unusual size of the welds, 8-10 passes were made on each joint.

The draw bridge sections of the new Woodrow Wilson bridge were so huge that the V piers holding them had to be extra large and had to be cast in place on the river. There was no crane big enough to assemble these giant structures from pre-cast concrete segments, so 40,000 cubic yards of High strength concrete had to be poured into the mammoth structure of each V pier. The concrete was poured into green reinforcing steel bars. To prevent emergence of thermal cracks, cold water was run through pipes inside the concrete pouring. With these cooling pipes, the internal temperature of the concrete was kept at 160°F, without these, the temperature would have reached above 200°F.

The Bascule sections of the bridge manufacturing were assembled together and then broken down again to enable them to be transported. There was no other feasible way to transport the bascule sections other than a barge through ocean water. The inside of the barge was filled with sea water to stabilise it against the ocean disturbances. While re-assembling the section, the structure was aligned to within 1/16th of an inch using surveying techniques like total station survey. If the alignment had gotten wrong, the bridge sections won’t had fit together when lifted into place.

The extreme engineering of the Woodrow Wilson bridge required huge preparations for lifting the heavy bridge section. Using hydraulic strand jacks, the 470 tons bascule girders were lifted 100 feet in to the air in 3” increments. After 6 hours of monstrous efforts the section was placed in its required place and bolted with the concrete structures.