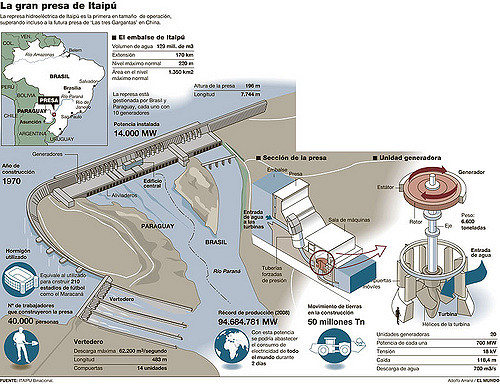 Itaipu dam is the world's most powerful dam built in Brazil in 1984.In 1994, the American Society of Civil Engineers selected the Itaipu Dam as one of the Seven Wonders of the Modern World.

Start of the project

Itaipu dam is the world's most powerful dam built in Brazil in 1984.In 1994, the American Society of Civil Engineers selected the Itaipu Dam as one of the Seven Wonders of the Modern World.

It was supposed to generate 90,000 Giga Watts of electricity each year. In 2000, the generating capacity of Itaipu reached 93.4 billion kilowatt-hours (kWh), which supplied 93% of the energy consumed by Paraguay, and 20% of that of Brazil. The frequency of generated electricity is 50 Hz but on Brazilian side a power converter transmits the 50 Hz into 60 Hz, which is the Brazilian grid frequency. 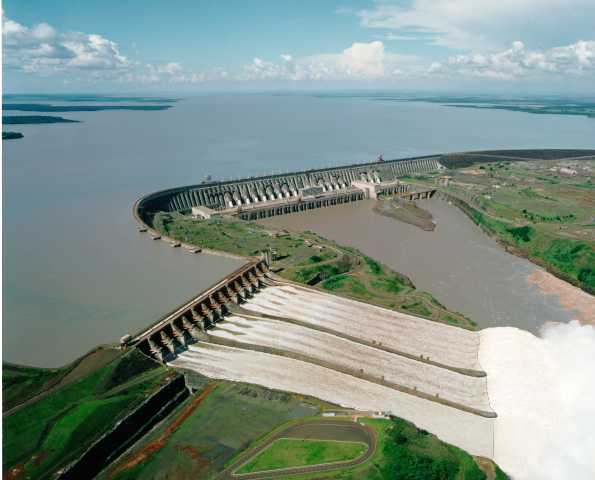 This amount of electricity generated is so high that it can fulfill London's electricity needs continuously for 3 years. The project cost was estimated at that time to be 13.5 billion pounds and was completed in 7 years by an army of 40,000 workers who took part in the project, of which 149 died in accidents during the construction of the dam.

River was re-routed for the Itaipu dam. A 2km long and 80m deep channel was dug. It was biggest diversion canal ever attempted. Mechanical diggers were used to dig the diversion canal and it took three years for this channel to be completed. Reservoir of the Itaipu dam is 100 m (330 ft) deep and has a size equal to the area of Chicago. Its area reaches 1 350 sq. km, its length 170 km and its average width 7 km.

The Population displaced for the project was about 10,000 families. For compensation of the displaced people photographic survey was done but the results were not accurate and precise so a door to door survey was conducted. The newly dug channel was used on 20th Oct, 1978 by blasting the concrete blocks. Only half of the river was diverted so cofferdams were built in the way of previous flow.

Coffer dam's stability was also checked by another engineer against torrential rains of Brazil and River Parana's Floods 400 m height was needed for the dam to produce the promised electricity Note: Higher the height of the dam walls more is the produced electricity But the river bed was only 50 m deep. Solution was to built a series of secondary dams running across the valley for 7 km.

An army of workers was needed for this purpose. Workers were collected from all over Brazil-about 40, 000 of them. For these workers new houses hospitals, schools, parks and churches were built. Dam design showed that it was not to be supported by natural or physical features, instead it was to be made so heavy that water would not move it. Thus it had to weigh 61 million tons and Itaipu dam was named Gravity dams. Natural physical features also support Hoover dam. The base of dams was wider and stood on sound solid foundations. The walls were made hollow and machinery and powerhouses were also installed therein to make the structure economical. During construction, in June 1979, weak layer of crumbling rock was discovered in the bedrock. The crushing rock was drilled out and replaced with a massive filling of 10 million pounds concrete of extra strength

The project was late by a few months because tunnels were dug to investigate the crumbling rock, which was right below the dam walls weighing 11 million tons. Water pressure at the wall was estimated to be equal to 4000 bulldozers pushing against them Huge steel structures were erected to be filled in by concrete. As block of concrete were very large, heat of hydration was also to be very large so aggregate was washed with ice and 4º C concrete was produced and temperature only reached 7º C during pouring.

If concrete was to be poured the usual way it would not set properly because blocks of concrete were very large, heat of hydration produced was also to be huge, causing cracks to appear in the block boundaries, resulting in weakened concrete. Moreover, temperature of Brazil was also 40ºC and during usual setting of concrete the temperature would thus have reached 90º C due to heat of hydration, causing weak spots in dam. Sun dried concrete is weaker so large-scale refrigeration plants were installed to ensure maximum strength of the concrete blocks.

Capacity of the refrigeration plants was equal to 50,000 domestic deep freezers.

The reservoir was the filled up with water by re-diverting the river. It took 14 days for the river Parana's water to completely fill the reservoir up to a depth of 100m. To stop the overflow of dam, spillways were built and designed to cope with 64 million liters/second of water. When first tested it was the biggest man made water fall ever. It was 22 times larger than the Niagara Falls in Canada. To dissipate the energy of high thrust water, a slope (jump) was provided at the end.

The water from the spillway had a high thrust and when if it were left to go directly down the stream it would have caused the production of high-energy waves, hence flooding. So, the water was thrown into the air. Hydraulic Engineers found out the angle of jump by scaled models. Each turbine was 800 tons and transported by specially built vehicles. Electricity was planned to be transferred 1000 km away to Sao Paulo and Rio de Janeiro.

Speed of Construction of Itaipu Dam

End of the project