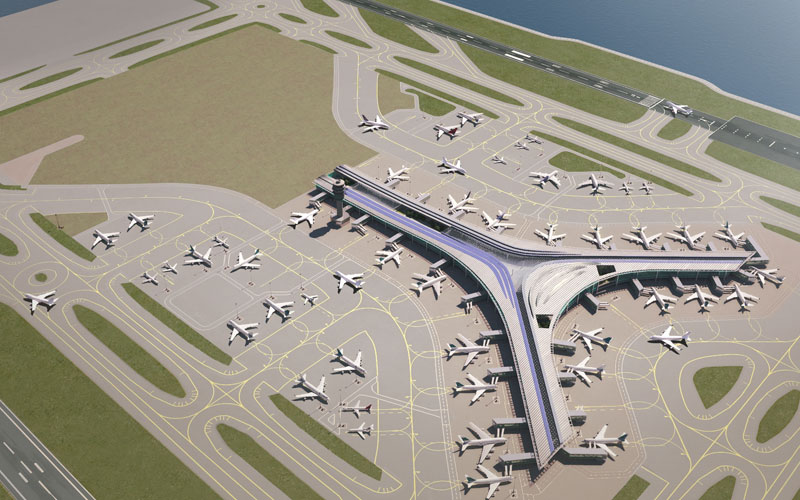 Start of the project

Hong Kong is one of the wealthiest cities in the world. Previously, it had an airport named Kai Tak. But that was in the middle of the city, endangering human life and property. It had only one run way and the congestion was a lot rather increasing day by day. The airplanes had to fly past the apartments and the tall buildings, very nearly and risk of accident was very high. A new airport was needed, but there was no land available even up to 16 km radially, from the previous airport.

The airport was itself just a small fraction of the whole project. The new airport was entitled as "the most ambitious civil engineering project" by many; because it had the largest passenger terminal in the world, heaviest jets were to be parked, 22 miles of super highways and tunnels were to be built to connect the airport to main city. 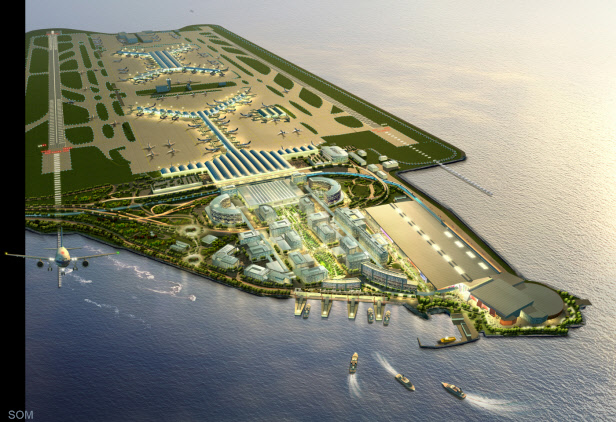 For the same purpose longest double Decker suspended bridges ever built, were also to be constructed along with speedy railways. The project was estimated to be completed in 15 - 20 years but only 7 years were given. The challenge started in September 1991.

1st challenge for the project was selection of a plain, leveled ground, which could be enough to accommodate the airport.

A site having mountainous islands, 16 miles from down town was selected. The mountains had to be removed resulting in 200 million tons of rocks removal by giant earth movers. The excavated rubble was suggested to be used to fill the sea to join the small islands into one big island. The largest fleet of under water dredgers arrived at the site and soft mud up to 40 ft was removed from the sea. This all proved to be the biggest land moving exercises ever i.e. 600 million tons of material was removed which is enough to fill ancient Roman Coliseum 200 times. As the airport was constructed outside the city, so to connect airport with the main city 1 mile long tunnel had to be built through the sea, having six (6) lanes.

Built of mammoth pre-cast concrete steel structures, weighing 35000 tons (equaling weight of an ocean liner), these pre-cast concrete steel structures were to be laid 50 ft under water up to 1 mile. While being laid they were capped with water tight seals, to prevent water from entering them and then put head to tail. The seals were then removed carefully by hydraulic jacks and the joint between each was made air tight.

In another area the width of water was 3 mile. A tunnel turned out to be non-feasible due to heavy traffic on that route. So bridges were proposed. The bridges were to be long enough to span the islands and high enough to allow most gigantic ships below it. To minimize the public sufferings during construction, work was done at night.

The building site was leveled and bridge construction started. Two bridges, whose towers rose to a height of 60 stories, were to be constructed. The strength and support to the bridge towers was provided by 3' diameter cable weighing up to 15000 tons. But all this could not be assembled on ground so they built it in the air. That was dangerous and difficult but done successfully. Then 1000 tons pre-fabricated deck stations were installed in the span and 5 years after the start of the whole project, bridge was completed. Each deck section was raised by the cables up to 200". So that to be installed at the required level.

The tunnel was made, bridge was ready, now both had to be connected together and for that purpose 2 new super highways were required. To build the highways, coastline had to be extended and 25 million tons of aggregate was dumped into the sea. The coastline was extended more than a half mile into the sea. This amount is so high that a 5' wall from Washington, D.C to San Francisco can be built using this amount. Terminal plans called for the largest enclosed space, more than a mile long. It covered an area of 6 million sq. ft. on land.

Foundation of the airport and other projects

The terminal design was easy and simple. It consisted of repeating lattice of steel trusses. 136 such lattices were produced each of 140 tons. Robotic operator crane, operated by remote control was used to assemble these steel lattices. Hong Kong was subjected to average 8 typhoons each summer. These typhoons are said to have one of the most destructive forces on earth, consisting of 200 miles/hr, composed of wind and water. Detailed scaled model was built after simulating computer models. The results of experiments on the model were drastic. Results showed that the bridge would become dangerously unstable during high winds. But the bridges could not be shortened, so were made heavier, thus stiffening them.