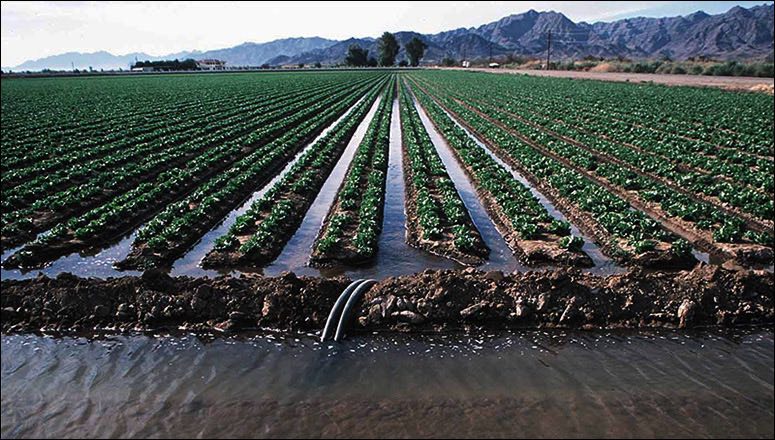 Surface irrigation is the introduction and distribution of water in a field by the gravity flow of water over the soil surface. The soil acts as the growing medium in which water is stored and the conveyance medium over which water flows as it spreads and infiltrates. In Water Resources Engineering Different types of surface irrigation systems used are:

The term 'surface irrigation' refers to a broad class of irrigation methods in which water is distributed over the field by overland flow. A flow is introduced at one edge of the field and covers the field gradually.

Surface irrigation events have 3 phases: advance, storage, and recession. During advance, the water moves down the  channel. The  second  phase  of  surface  irrigation  is  the  storage  phase.  After  the  advance reaches the end of the field, the water must remain ponded for a sufficient length of time for the end of the field to receive the required depth of water. After irrigation water is turned off at the time of cutoff, recession begins: ponded water infiltrates or moves down the furrow  and the upper end dries.

The rate of coverage (advancement) is dependent on:

The practice of surface irrigation is thousands of years old. It represents about 95 % of common irrigation activity today. The first water supplies were developed from stream or river flows onto the adjacent flood plain through simple check-dams and a canal to distribute water to various locations. The low-lying soils served by these diversions were typically high in clay and silt content (alluvium) and tended to be most fertile. With the advent of modern equipment for moving earth and pumping water, surface irrigation systems were extended to upland areas and lands quite separate from the flood plain of local rivers and streams.

Below are the advantages and disadvantages of surface irrigation methods based on the following factors:

Surface irrigation offers a number of important advantages at both the farm and project level. The gravity flow system is a highly flexible, relatively easily-managed method of irrigation.

There is one disadvantage of surface irrigation that confronts every designer and irrigator. The soil which must be used to convey the water over the field has properties that are highly varied both spatially and temporally. They become almost undefinable. This creates an engineering problem, in which at least two of the primary design variables, discharge and time of application, must be estimated. This estimation should not only be done at the field layout stage but also judged by the irrigator prior to the initiation of every surface irrigation event. Thus while it is possible for the new generation of surface irrigation methods to be attractive alternatives to sprinkler and trickle systems, their associated design and management practices are much more difficult to define and implement.

Although they need not be, surface irrigation systems are typically less efficient in applying water than either sprinkler or trickle systems. Many are situated on lower lands with heavier soils and, therefore, tend to be more affected by water logging and soil salinity if adequate drainage is not provided. The need to use the field surface as a conveyance and distribution facility requires that fields be well graded if possible. Land leveling costs can be high so the surface irrigation practice tends to be limited to land already having small, even slopes.

Surface systems tend to be labor-intensive. This labor need not be overly skilled. But to achieve high efficiencies the irrigation practices imposed by the irrigator must be carefully implemented. The progress of the water over the field must be monitored in larger fields and good judgement is required to terminate the inflow at the appropriate time. A consequence of poor judgement or design is poor efficiency.

One sometimes important disadvantage of surface irrigation methods is the difficulty in applying light, frequent irrigation early and late in the growing season of several crops. For example, in heavy calcareous soils where crust formation after the first irrigation and prior to the germination of crops, a light irrigation to soften the crust would improve yields substantially. Under surface irrigation systems this may be unfeasible or impractical as either the supply to the field is not readily available or the minimum depths applied would be too great.

Causes, Importance And Prediction of Flood