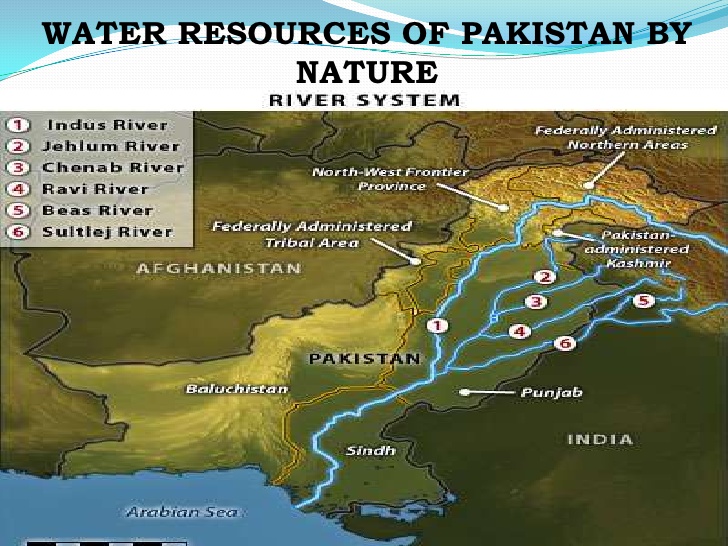 According to the United Nations' "UN World Water Development Report", the total actual renewable water resources decreased from 2,961 m³ per capita in 2000 to 1,420 m³ per capita in 2005. A more recent study indicates an available supply of water of little more than 1,000 m³ per person, which puts Pakistan in the category of a high stress country. In view of growing population, urbanization and increased industrialization, the situation is likely to get worse.

In addition, increasing pollution and saltwater intrusion threaten the country's water resources. About 36% of the groundwater is classified as highly saline.

In urban areas, most water is supplied from groundwater except for the cities of Karachi, Hyderabad and a part of Islamabad, where mainly surface water is used. In most rural areas, groundwater is used. In rural areas with saline groundwater, irrigation canals serve as the main source of domestic water. Out of the 169,384 billion m³ of water which were withdrawn in 2000, 96% were used for agricultural purposes, leaving 2% for domestic and another 2% for industrial use. This shows the significance of agriculture in the country. Pakistan still has the world's largest interconnected & Continous irrigation system. In 1999-2000, the total irrigated area in Pakistan was 181,000 km². Pakistan has one of the world’s largest gravity-flow irrigation systems, with:

More than 160,000 watercourses comprise the distribution network that takes water directly to the farms. More than half of these watercourses are in Punjab—the largest of the country’s four provinces and the biggest agricultural producer. The system commands a land area of 14.3 million hectares, making it the backbone of Pakistan’s agriculture and contributes one-fourth of country’s total gross domestic product (GDP). About 29% of water is generated through hydropower.

Irrigation Efficiency - Definition and Its Types