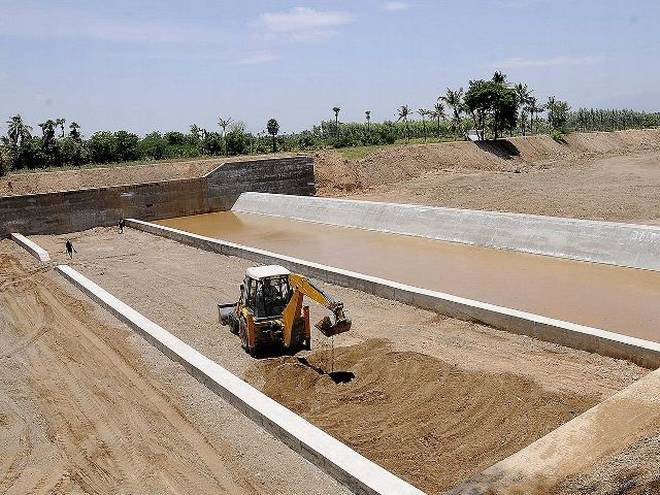 Earth dams are generally built of locally available materials in their natural state with a minimum of processing. Homogeneous earth dams are built whenever only one type of material is economically available. The material must be sufficiently impervious to provide an adequate water barrier and slopes must be relatively flat to make it safe against piping and sloughing.

The general design procedure is to make a first estimate on the basis of experience with similar dams and then to modify the estimate as required after conducting a stability analysis except where there is a surplus of material. The United States Department of the Interior Bureau of Reclamation (USBR) and other agencies suggested limits for the upstream and the downstream slopes for different types of materials and dams. 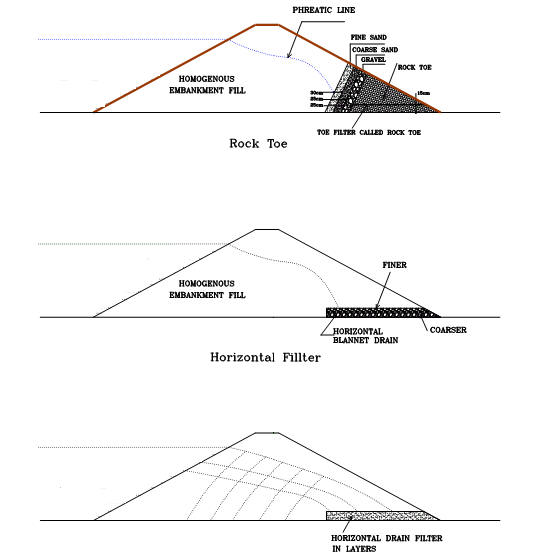 The upstream slopes of most of the earth dams in actual practice usually vary from 2.0 (horizontal):1 (vertical) to 4:1 and the downstream slopes are generally between 2:1 and 3:1 (USBR 2003). Free board depends on the height and action of waves. USBR (2003) recommends normal free-board about 1.5 to 3 m depending on the fetch. The width of the dam crest is determined by considering the nature of embankment materials, height and importance of structure, possible roadways requirements, and practicability of construction. A majority of dams have the crest widths varying between 5 and 12 m.

About 30% of dams had failed due to the seepage failure, viz piping and sloughing. Recent comprehensive reviews by Foster et al. (2000a,b) and Fell et al. (2003) show that internal erosion and piping are the main causes of failure and accidents affecting embankment dams; and the proportion of their failures by piping increased from 43% before 1950 to 54% after 1950. The sloughing of the downstream face of a homogeneous earth dam occurs under the steady-state seepage condition due to the softening and weakening of the soil mass when the top flow line or phreatic line intersects it. Regardless of flatness of the downstream slope and impermeability of soil, the phreatic line intersects the downstream face to a height of roughly one-third the depth of water.

It is usual practice to use a modified homogeneous section in which an internal drainage system in the form of a horizontal blanket drain or a rock toe or a combination of the two is provided. The drainage system keeps the phreatic line well within the body of the dam. Horizontal filtered drainage blankets are widely used for dams of moderate height. USBR constructed the 50 m high Vega dam, which is one of the highest with a homogenous section and a horizontal downstream drain.

The minimum length of the horizontal blanket drain required to keep the phreatic line within the body of the dam by a specified depth and also equations for maximum downstream slope cover and minimum and maximum effective lengths of the downstream filtered drainage system.

The position of the phreatic line influences the stability of the earth dam because of potential piping due to excessive exit gradient and sloughing due to the softening and weakening of the soil mass as if it touches the downstream slope or intersects it. When the dam embankment is homogeneous or when the downstream zone is of questionable permeability, a horizontal drainage blanket is provided to keep the phreatic line well within the dam body, to allow adequate embankment and foundation drainage, and to eliminate piping from the foundation and the embankment.