Run-off analysis taking into account physical processes have been able to be carried out due to sophisticated computers. River basin is formed by a flow in a river channel, an infiltration flow and a groundwater flow that have different hydraulic characters.

The Bureau of Reclamation has used a method called, "Snow Compaction Method for the Analyses of Runoff from Rain on Snow." This method requires air temperatures, wind speeds, forest cover percentages, snow depths, and now densities at various elevation bands. When the snow melt runoff is expected to contribute to the PMF (Probable Maximum Flood (PMF):

It is a flood event which results from the most severe and reasonably possible combination of rainstorm, snow accumulation, melt rate and antecedent moisture conditions), the wind speeds and air temperatures are usually furnished by Bureau meteorologists as a part of the probable maximum storm study. From a search of records, the hydrologist determines the snow depths and densities considered reasonable for initial watershed conditions 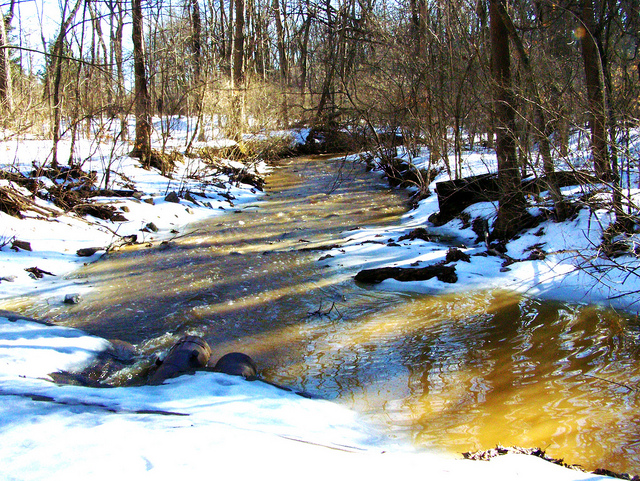 Role of Hydraulic Engineer in determining Flood Run off

This method of determining the total flood runoff from snow-melt requires several decisions by the hydrologic engineer. Several trial arrangements of the rainfall, wind speeds, and air temperatures are usually required to ensure that the largest flood has been computed. The initial snow depths and densities may also need adjustment to ensure that a reasonable amount of snow has been melted and not too much rain has been trapped in the snow remaining in the upper-elevation bands. Without experience and care, this method can become erratic. Thus, for consistency and ease of application, the use of a 100-year snowmelt flood combined with the probable maximum rain flood is considered a suitable alternative to the snow compaction method.

The normally accepted practice of the Bureau of Reclamation is to combine the probable maximum rain flood with a snowmelt flood reasonably expected at the time of year that the probable maximum storm occurs. Of course, this practice is only used for those areas where significant snow packs occur.

The most common and simplest method of accounting for snow-melt is to use a 100-year snowmelt flood. A frequency analysis of the maximum annual snow flood volume is made, and the 100-year flood is determined. The usual period of runoff selected is 15 days. The 100-year snow melt flood is then distributed over time using the largest recorded snow melt flood as the basis for distribution. The resulting snowmelt flood hydro graph is generally expressed in terms of mean daily flows for the 15-day period, with diurnal fluctuations neglected.

The rain flood hydro-graph is then superimposed on the snow-melt flood hydrograph with the rain assumed to occur during the day or days of the greatest snow-melt flooding. This assumption is made so that the maximum rain occurs during the warmest period. The resulting combined rain snow flood is the PMF.

Each flood hydrology study should consider information on the flood peak and the volumes that have been experienced in the hydrologic region. This information is presented in the form of a curve enveloping the data points representing the peak discharge or the flow volume for specified time duration versus the drainage area contributing to the flood runoff.

These curves are particularly valuable in the development of PMF estimates because they provide definitive information on the magnitude of floods that have occurred over various size drainage basins in a hydrologically homogeneous region. They should not be construed as indicating the limit of the magnitude of future flood events.

As time passes and more data are collected, each envelope curve will inevitably be altered upward. PMF values should always be higher than the properly drawn envelope curve. If this is not the case, both the envelope curve and the PMF estimate must be carefully reviewed to determine whether some hydrological or meteorologic parameter has been neglected or improperly used.

Applications of Hydrology in Civil Engineering
Methods of Measurement of Evaporation