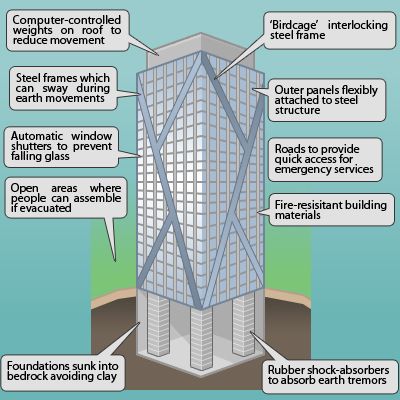 Seismic effects on the structure

Earthquake causes shaking of the ground. So a building resting on it will experience motion at its base. From Newton's First Law of Motion, even though the base of the building moves with the ground, the roof has a tendency to stay in its original position. But since the walls and columns are connected to it, they drag the roof along with them. This tendency to continue to remain in the previous position is known as inertia. In the building, since the walls or columns are flexible, the motion of the roof is different from that of the ground (Figure 1). 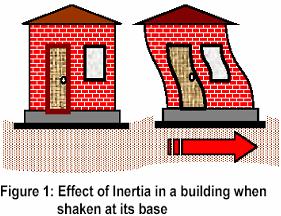 Buildings experience motion due to earthquake.

Effect of Deformations in Structures

The inertia force experienced by the roof is transferred to the ground via the columns, causing forces in columns.

Flow of Inertia Forces to Foundations

Gravity vs Earthquake Loading in a Reinforced Concrete Building

Gravity loads (Self weight) causes RC frames to bend, resulting in stretching and shortening at various locations. Tension is generated at surfaces

a. Basic Requirement: The basic requirements for Beams in SMRF according to section 21.3.1.1 are summarized as follows

I. Transverse reinforcement in the form of hoops must be used over a length equal to twice the member depth measured from the face of the supporting member toward midspan at both ends, as per calculation, but fulfilling following conditions.

II. Elsewhere hoops as per calculation but spacing not to exceed d/2

where d is effecive depth along least dimension of col.

For a frame the flexural capacity) of the members at a joint should be such that the columns are stronger than the beams. In this way. hinges will form in the beams rather than the columns, maintaining the overall vertical load capacity. For these reasons. the "weak beam-strong column" approach is used to design reinforced concrete frames subject to seismic loading.

ACI recommendations: To provide adequate confinement within a joint, the transverse reinforcement used in columns must be continued through the joint. in accordance with ACI Code21.5.2.

For columns, within length L0 from the joint face, the tie spacing so may not exceed