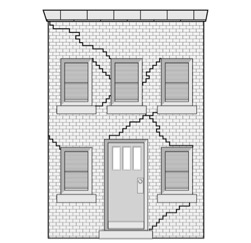 For given direction of earthquake, wall A acts as a shear wall and B acts as flexure wall. If the walls are not tied together wall B overturn (out of plane) and wall A slides (in plane) and collapse occurs. Masonry units should be tied properly.

Lack of connection between orthogonal walls

Such type of failure was among the most common, resulting from out-of-plane vibration of the walls. As the wall bends outward the intersecting perpendicular walls offer a restraint that relies on tensile strength of masonry, which eventually cracks. Intersection of orthogonal walls are also characterized by shear stresses due to flange-web action that can further facilitate cracking.

Damage of such type occurs as a result of the forces transmitted between walls and roof, mostly due to out-of- plane horizontal excitation of the walls but also to vertical ground accelerations which could be very high in localities very close to the fault rupture (e.g. Balakot). The top of the wall may slip out from underneath the roof and/or crush under dynamic loading, in particular in the case of poor quality masonry (rubble stone) and relatively heavy and rigid roofs non properly connected. Also, in the case of light roofs, the friction under the roof bearing may not be sufficient to avoid slippage.

When the Earthquake force is parallel to the plane. The wall experiences shear off or bending. X- cracks occurs in the walls along with vertical cracks at wall intersections, separation of corners of two walls, spalling of materials, etc. In-plane diagonal cracks and X-diagonal cracks result from shear forces in the plane of the walls. The development of these cracks is related to a overall response of the building, foundation and its soil: depending on the level of drift demand, the damage can be moderate and easily repairable, or severe to the extent that the buildings are usually unfit for further use, but the consequence to the people are significantly less serious than in the case of out of plane wall overturning

The Earthquake force is perpendicular to the plane. The wall tends to overturn or bend. This causes the partial or full collapse of the wall. This is due to Inadequate anchorage of wall and roof, long and slender wall, etc. Characterized by vertical cracks at corner, cracks at lintel, roof level and gable wall, etc. Out-of-plane lateral thrust at roof level due to inclined roofs adding to inertial forces is also a significant cause of collapse of masonry structures. In addition to the roof lateral thrust, another observed reason for out-of-plane failures is the lack of connection between walls and supporting roof, neither any restraints are provided nor any ring beam.

Failure due to openings in wall

Opening will obstruct the flow of forces from one wall to another. Large opening in shear wall reduces the strength of wall against the inertia forces. Results diagonal cracks in the areas of masonry between opening and cracks at the level of opening. Thus, openings should small and away from corners. These cracks (Figure 4) can be a result of both in-plane shear forces and out-of plane flexure of the wall, and are initiated from stress concentration at the corners of the openings.

They are not particularly serious unless the relative displacement across the cracks is large, in which case instability of the section of the wall above the opening becomes an issue.

Lack of anchoring produce a push of diaphragm against the wall. Absence of good shear transfer between diaphragms and reaction wall accounts for damage at corner of wall. Rare phenomenon in the event of seismic motion. Separation of wall and diaphragm cause collapse of buildings. (Javed et al., 2006)

Quasi Static Test - What, Why, How
Seismic Design Criteria in Earthquake Engineering