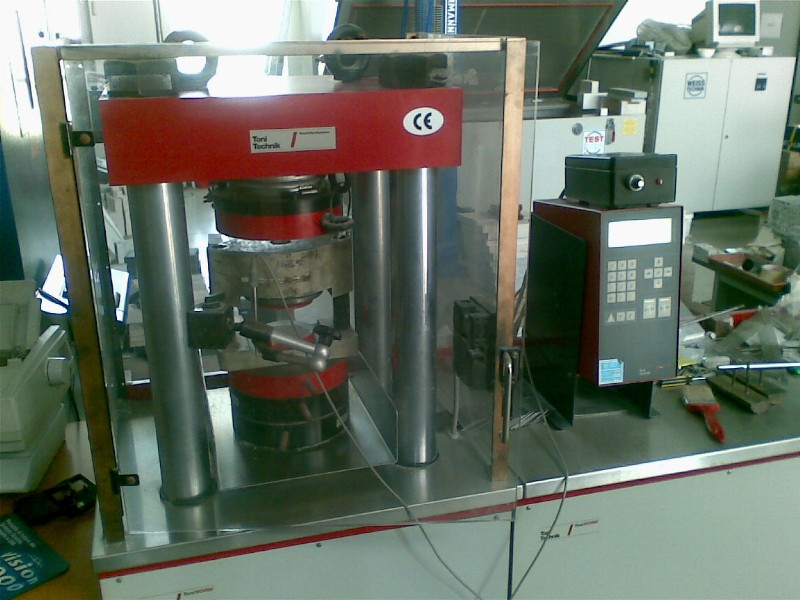 The compressive strength of concrete is about 4000 psi.

The compressive strength of concrete can be calculated by the failure load divided with the cross sectional area resisting the load and reported in pounds per square inch in US customary units and mega pascals (MPa) in SI units. Concrete's compressive strength requirements can vary from 2500 psi (17 MPa) for residential concrete to 4000psi (28 MPa) and higher in commercial structures. Higher strengths up to and exceeding 10,000 psi (70 MPa) are specified for certain applications.

Importance of Determining the Compressive Strength:

Compressive strength results are primarily used to determine that the concrete mixture as delivered on site meets the requirements of the specified strength, fc', in the job specification. Cylinders tested for acceptance and quality control are made and cured in accordance with procedures described for standard-cured specimens in ASTM C-31 (which is the Standard Practice for Making and Curing Concrete Test Specimens in the Field). For estimating the in place concrete strength, ASTM C-31 provides procedures for field-cured specimens. Cylindrical specimens are tested in accordance with ASTM C-39 (which is standard Test Method for Compressive Strength of Cylindrical Concrete Specimens).

A test result is the average of at least two standard-cured strength specimens made from the same concrete batch and tested at the same age. In most cases strength requirements for concrete are at 28 days.

It is important to understand that an individual test falling below fc' does not necessarily mean that the test has failed and specifications were not as per requirement. When the average of strength tests is as per the required average strength fc', the probability that individual strength tests will be less than the specified strength is about 10% and this is accounted for in the acceptance criteria.

When strength test results indicate that the concrete fails to meet the requirements of the specification, it is important to recognize that the failure of concrete may also be due to the testing procedure. This is especially true if the fabrication, handling, curing and testing of the cylinders are not conducted in accordance with standard procedures.