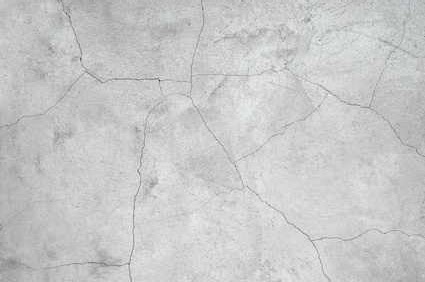 Concrete is subjected to changes in volume either autogenous or induced. Volume change is one of the most detrimental properties of concrete, which affects the long-term strength and durability. To the practical engineer, the aspect of volume change in concrete is important from the point of view that it causes unsightly cracks in concrete and called concrete shrinkage.

Concrete Shrinkage is the change in length per unit length and is, therefore, a dimensional number expressed as percent. Shrinkage is time-dependent and its value includes plastic shrinkage, autogenous shrinkage, drying shrinkage, and carbonation shrinkage usually quantified in terms of micro strain which is equal to 1x10^-6 in/in or 1x10^-6 m/m.

We have discussed elsewhere the effect of volume change due to thermal properties of aggregate and concrete, due to alkali/aggregate reaction, due to sulphate action etc. Presently we shall discuss the volume change on account of inherent properties of concrete “shrinkage”. One of the most objectionable defects in concrete is the presence of cracks, particularly in floors and pavements. One of the important factors that contribute to the cracks in floors and pavements is that due to shrinkage. It is difficult to make concrete which does not shrink and crack. It is only a question of magnitude. Now the question is how to reduce the shrinkage and shrinkage cracks in concrete structures. The term shrinkage is loosely used to describe the various aspects of volume changes in concrete due to loss of moisture at different stages due to different reasons.

Types of Shrinkage in Concrete

To understand this aspect more closely, shrinkage can be classified in the following way:

(a) Plastic Shrinkage in concrete

(b) Drying Shrinkage in concrete

The Types of shrinkage are explained as below:

Plastic shrinkage in concrete can be reduced mainly by preventing the rapid loss of water from surface. This can be done by covering the surface with polyethylene sheeting immediately on finishing operation; by fog spray that keeps the surface moist; or by working at night. Use of small quantity of aluminium powder is also suggested to offset the effect of plastic shrinkage. Similarly, expansive cement or shrinkage compensating cement also can be used for controlling the shrinkage during the setting of concrete.

Just as the hydration of cement is an ever lasting process, the drying shrinkage is also an ever lasting process when concrete is subjected to drying conditions. The drying shrinkage of concrete is analogous to the mechanism of drying of timber specimen. The loss of free water contained in hardened concrete, does not result in any appreciable dimension change. It is the loss of water held in gel pores that causes the change in the volume. Under drying conditions, the gel water is lost progressively over a long time, as long as the concrete is kept in drying conditions. Cement paste shrinks more than mortar and mortar shrinks more than concrete. Concrete made with smaller size aggregate shrinks more than concrete made with bigger size aggregate. The magnitude of drying shrinkage is also a function of the fineness of gel. The finer the gel the more is the shrinkage.

Autogeneous shrinkage, also known as “basic shrinkage,” is the shrinkage due to chemical reactions between cement with water, known as hydration, and do not include environmental effects such as temperature and moisture changes. Its magnitude is usually ignored in concretes with w/c more than 0.40.

Carbon dioxide present in the atmosphere reacts in the presence of water with hydrated cement. Calcium hydroxide [Ca(OH)2] gets converted to calcium carbonate and also some other cement compounds are decomposed. Such a complete decomposition of calcium compound in hydrated cement is chemically possible even at the low pressure of carbon dioxide in normal atmosphere. Carbonation penetrates beyond the exposed surface of concrete very slowly. The rate of penetration of carbon dioxide depends also on the moisture content of the concrete and the relative humidity of the ambient medium. Carbonation is accompanied by an increase in weight of the concrete and by shrinkage.

Carbonation shrinkage is probably caused by the dissolution of crystals of calcium hydroxide and deposition of calcium carbonate in its place. As the new product is less in volume than the product replaced, shrinkage takes place. Carbonation of concrete also results in increased strength and reduced permeability, possibly because water released by carbonation promotes the process of hydration and also calcium carbonate reduces the voids within the cement paste. As the magnitude of carbonation shrinkage is very small when compared to long term drying shrinkage, this aspect is not of much significance

Other factors that have an effect on the magnitude of shrinkage include mix proportions, material properties, curing methods, environmental conditions, and geometry of the specimen. Water content has been found to affect the magnitude and rate of drying shrinkage in concrete. Other factors include elastic properties of the aggregate used in the concrete mix; in general, aggregate with a high elastic modulus will produce low shrinkage concrete. Aggregates which contain clay minerals will affect shrinkage behavior as well. 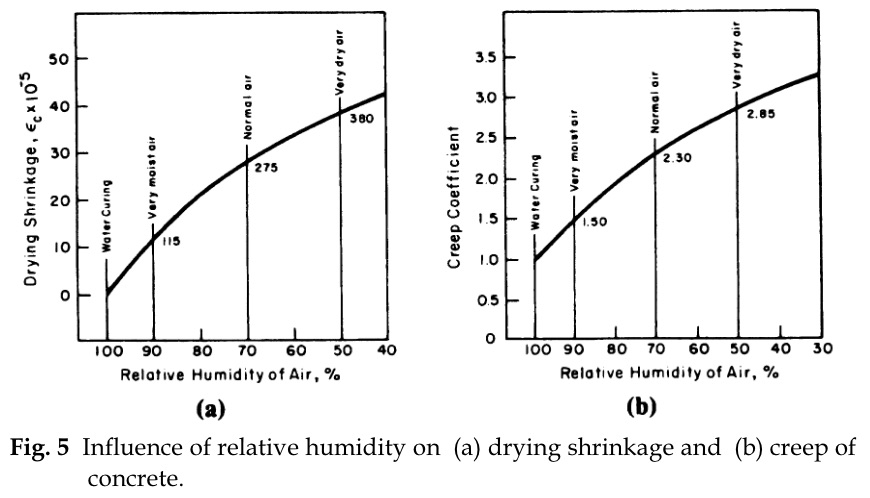 Harder aggregate with higher modulus of elasticity like quartz shrinks much less than softer aggregates such as sandstone.

Concrete shrinks when allowed to dry in air at a lower relative humidity and it swells when kept at 100 per cent relative humidity or when placed in water. Just as drying shrinkage is an ever continuing process, swelling, when continuously placed in water is also an ever continuing process. If a concrete sample subjected to drying condition, at some stage, is subjected to wetting condition, it starts swelling. It is interesting to note that all the initial drying shrinkage is not recovered even after prolonged storage in water which shows that the phenomenon of drying shrinkage is not a fully reversible one. Just as the drying shrinkage is due to loss of adsorbed water around gel particles, swelling is due to the adsorption of water by the cement gel. The water molecules act against the cohesive force and tend to force the gel particles further apart as a result of which swelling takes place. In addition, the ingress of water decreases the surface tension of the gel.

The size and shape of coarse aggregate influence the loss of moisture and it has therefore an indirect effect on the shrinkage of concrete. In general, the smaller the aggregate size, the more surface area, more water is absorbed as a result and, therefore, more shrinkage. This means that whenever low shrinkage is desired, largest aggregate size should be used.