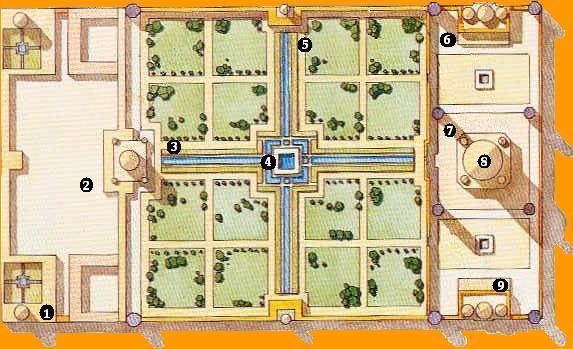 History "A white marble tomb built in 1631-48 in Agra, seat of the Mugal Empire, by Shah Jehan for his wife, Arjuman Banu Begum, the monument sums up many of the formal themes that have played through Islamic architecture. Its refined elegance is a conspicuous contrast both to the Hindu architecture of pre-Islamic India, with its thick walls, corbeled arches, and heavy lintels, and to the Indo-Islamic styles, in which Hindu elements are combined with an eclectic assortment of motifs from Persian and Turkish sources."

Taj Mahal is regarded as one of the eight wonders of the world, and some Western historians have noted that its architectural beauty has never been surpassed. The Taj is the most beautiful monument built by the Mughals, the Muslim rulers of India. Taj Mahal is built entirely of white marble. Its stunning architectural beauty is beyond adequate description, particularly at dawn and sunset. The Taj seems to glow in the light of the full moon. On a foggy morning, the visitors experience the Taj as if suspended when viewed from across the Jamuna river.

Taj Mahal was built by a Muslim, Emperor Shah Jahan (died 1666 C.E.) in the memory of his dear wife and queen Mumtaz Mahal at Agra, India. It is an "elegy in marble" or some say an expression of a "dream." Taj Mahal (meaning Crown Palace) is a Mausoleum that houses the grave of queen Mumtaz Mahal at the lower chamber. The grave of Shah Jahan was added to it later. The queen’s real name was Arjumand Banu. In the tradition of the Mughals, important ladies of the royal family were given another name at their marriage or at some other significant event in their lives, and that new name was commonly used by the public. Shah Jahan's real name was Shahab-ud-din, and he was known as Prince Khurram before ascending to the throne in 1628. 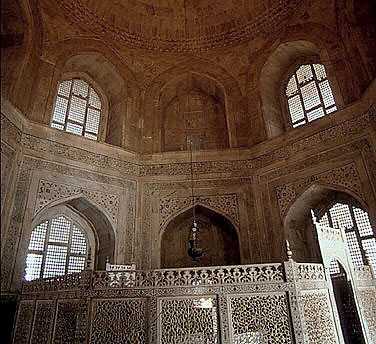 Taj Mahal was constructed over a period of twenty-two years, employing twenty thousand workers. It was completed in 1648 C.E. at a cost of 32 Million Rupees. The construction documents show that its master architect was Ustad ‘Isa, the renowned Islamic architect of his time. The documents contain names of those employed and the inventory of construction materials and their origin. Expert craftsmen from Delhi, Qannauj, Lahore, and Multan were employed. In addition, many renowned Muslim craftsmen from Baghdad, Shiraz and Bukhara worked on many specialized tasks.

The mausoleum is a part of a vast complex comprising of a main gateway, an elaborate garden, a mosque (to the left), a guest house (to the right), and several other palatial buildings. The Taj is at the farthest end of this complex, with the river Jumna behind it. The large garden contains four reflecting pools dividing it at the center. Each of these four sections is further subdivided into four sections and then each into yet another four sections. Like the Taj, the garden elements serve like Arabesque, standing on their own and also constituting the whole.

The minarets have an octagonal base and cylindrical body tapering to an eight-sided open pavilion. The body of the minarets is sectioned by three balconies which create shadows and interest in an otherwise plain design. An exquisite band of marble inlay and geometric patterns sporting the chevron design encircle the minaret below the top balcony. The summit of the gold gilded finial perched on the top of the dome of the Taj Mahal reaches two hundred and twenty feet [67 meters] above the ground. At the top sits a lotus bud and under this is a water pot. This arrangement was adapted to the Islamic domain from the 12th century. Its function is purely decorative, accompanying the form of the dome.