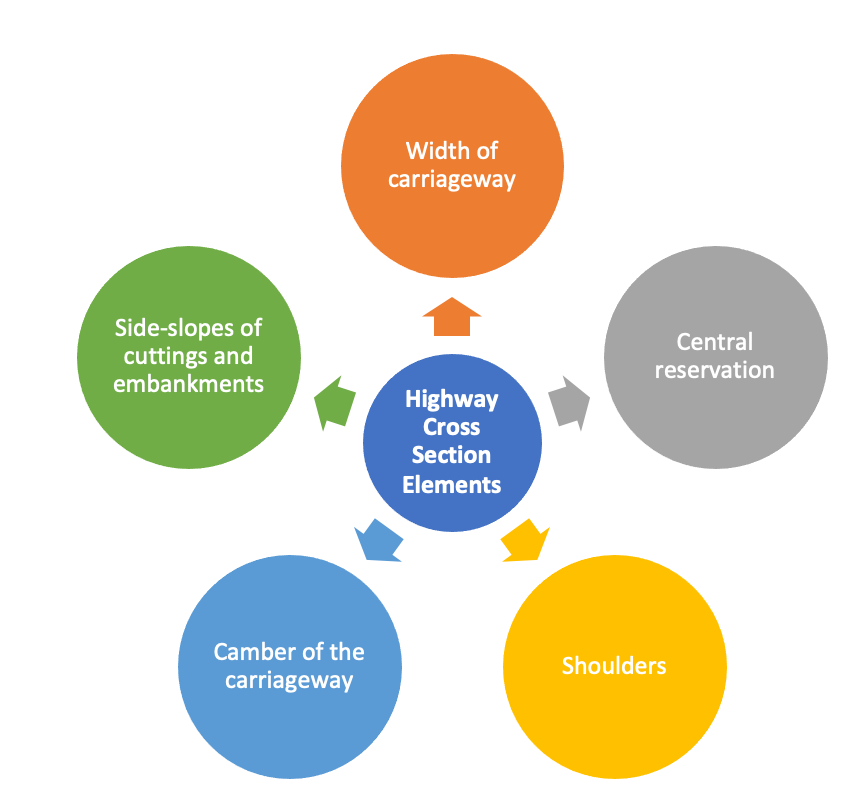 The typical cross section of roads provided by AASHTO for a two lane highway is given below.

Elements in Cross Section of Roads

Road Cross-Section elements are those features of a roadway which forms its effective width. There are two types of road cross section elements:

The width of the surfaced road and the no of lanes should be adequate to accommodate the type and volume of traffic anticipated, the assumed design speed of vehicles and in meeting oncoming vehicle or passing slower ones. As traffic density, vehicle speed and truck widths have increased, two lane highway have also increased in width from 16’ to the current recommended value of 24’ width.

Lane width is normally not less than 3.5m. Narrower lanes are used for economic or environmental reasons. Two-way local distributor route can be as narrow as 6.1m in carriageway width, provided that kerb (curb) parking is is restricted. In urban areas width of the near side lane is often increased, to: 

In rural roads, recommended lane width is 3.65m to:reduce accidents and increase capacity. Standard edge treatment on normal two-lane single carriageways consists of a 1m strip of the same construction as the carriageway on both sides with a solid white line so that total width becomes 9.3m.

Standard for the interstate system set lane width at 11’ for rural roads when traffic density is less than 200 vehicles per lane per hour. For other rural and all urban facilities widths are set to be 22’. For primary highway carrying over 200 vehicles, lane widths are 11’ per 12’ depending on design speed and no of commercial vehicles. For secondary roads desirable lane is 10’.

A median is the element of a divided roadway that separates the lanes in opposing directions. In order to provide positive protection against a conflict with opposing traffic median strop are provided on divided highways. The width of these median strip varies from 4’ to 60’.

Where median strips are narrow separation, is merely provided by raised curbs and, where greater widths are available curbs may (or may not) be used. Often in rural areas the wide division alone serves the purpose and no raised barrier is employed. Median is an important component of cross section of roads.

Advantages of Median of a road

Due to high cost of land, narrow width is provided at normal sections and added widths where right turn or x-traffic are to be accommodate are used. Medians are often narrowed at grade separation in order to reduce the length or width of the structure. Median width of 60’ or wide are inadvisable at signalized intersection locations because extra time is required.

In the cross section of roads it is that portion of the roadway between the outer edge of the outer traffic lane and the inside edge of the ditch, gutter, curb or slope. Shoulders are provided for the safe operation and to allow the development of full traffic capacity. Shoulder also provides a place for vehicle to park in emergency e.g. for changing tires. Shoulders also function to laterally support the pavement structure.

Dimensions of the Road Shoulder:

It is common to pave it inside from 18” to 3’ with bituminous material or at least to apply bituminous surface treatment. In some instances, full width is paved or treated. Turfed shoulders are provided in areas with sufficient rainfall. It is common practice to mark the line between roadway and shoulder as guide.

Slope of the shoulder should be greater than that of pavement shoulder with high type surface. Slope form 2 to 6%, gravel 4 to 6% and turf 6 to 8% to assure efficient drainage away from pavements.

Pavements on straight sections of two-lane and multi lane roadways without medians are sloped from the middle downward to both sides of the roadway. This provides a cross slope, whose road cross section can be either curved or plane or a combination of the two.

The slope provided to road surface in the traverse direction to drain off rainwater from road surface is called cross-slopes. It is introduced in all tangent sections of the roadway except at curves where super elevation directs all water toward the inside.

The different shapes of cross-slopes are given below:

The rate of caber depends upon:

For high pavement 1/8in per ft. Whereas for steep slopes camber should be avoided.

4. Side Slopes in Roadway Cross Section:

The graded area immediately adjacent to the graded roadway shoulder is called side slope. Side slopes are provided on embankments and fills to provide stability for earthworks.  They also serve as a safety feature by providing a recovery area for out-of-control vehicles.

BACKSLOPE: Slopes back to natural topography are known as back slope.

FARESLOPE: Slopes down to ditch are called fare slope.