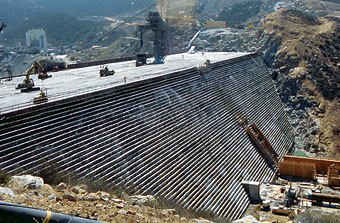 The consolidation by a roller does not require special cements; however, when RCC is to be used in mass concrete, the recommendation of selecting cements with lower heat generation

Mineral admixtures are used extensively in RCC mixtures. The use of large amounts of mineral admixtures reduces both the adiabatic temperature rise of concrete and costs, and improves durability. In the United States, Class F fly ash is the most common mineral admixture used in dams, however, in other parts of the world Class C fly ash, slag, and natural pozzolan have also been used.

Air-entraining and water-reducing admixtures are used in RCC compositions that contains higher volume of paste. Set-retarding admixtures can extend the time up to which the concrete lift should remain unhardened, reducing the risk of cold joints with the sub sequence lift. In RCC mixtures of dry consistency, however, chemical admixtures show rather a limited effectiveness.

Aggregates greater than 76 mm in diameter (3 in.) are seldom used in RCC because they can cause problems in spreading and compacting the layer. The size of coarse aggregate has a significant influence on the degree of compaction in small layers. This influence is less marked in relatively thicker layers specially when large vibratory rollers are employed. The use of material finer than 75 mm (No. 200 mesh sieve) produces a more cohesive mixture by reducing the volume of voids.

Uses the principles of soil compaction to produce a lean RCC, where the optimum water content of the concrete is the one that produces the maximum dry density of the mixture. This method does not utilizes the conventional concept of minimizing the water-to-cement ratio to maximize the concrete strength; the best compaction gives the best strength, and the best compaction occurs at the most wet mix that will support the operating vibrating roller.

The overriding criteria for these mixtures are the compressive and shear strength since the dam using this type of concrete typically will have an impermeable upstream face made either by traditional mass concrete or precast panels.

Uses traditional concrete technology methods to produce high-paste RCC mixtures. Upper Still water and Elk Creek Dams are examples of dams that were built using this approach. The overriding criteria for these mixtures are the shear strength between the lifts and low permeability of concrete since no protective, impermeable face is used upstream.

The long-term deformation of RCC depends on the amount and the type of aggregate, the water to cement ratio, the age of loading, and the duration of loading. RCC with lower compressive strength and lower elastic modulus will normally show high creep which is a critical factor in determining the stress relaxation when thermal strain is restrained. Lean concrete with large amounts of fines also shows high creep.

The adiabatic temperature rise of RCC is similar to conventional mass concrete mixtures and depends on the amount and type of cementitious material used in the mixture. The specific heat, conductivity, and coefficient of thermal expansion are a function of the type and amount of aggregate used in the mixture.

The coefficient of permeability of RCC is a critical parameter for long-term performance of dams, particularly if no impermeable membrane has been used at the upstream face of the dam. The construction process of RCC generates porous zones between the lifts where water can percolate. Depending on the mixture proportions and construction process, the coefficient of permeability can very over 8 orders of magnitude. For instance, the lean concrete at Willow Creek dam had a coefficient of permeability of 2 x 10-4 m/s, while the coefficient of permeability at Upper Still water Dam was 4 x 10-12 m/s. Willow Creek Dam, however, has an impermeable membrane at its upstream face. If the moisture content in concrete goes beyond the critical saturation point, the performance of non-air entrained RCC to cycles of freezing and thawing will be poor; however, if the structure does not become saturated, the frost resistance of RCC is satisfactory. Air-entrainment of very lean RCC mixtures has not been very successful.