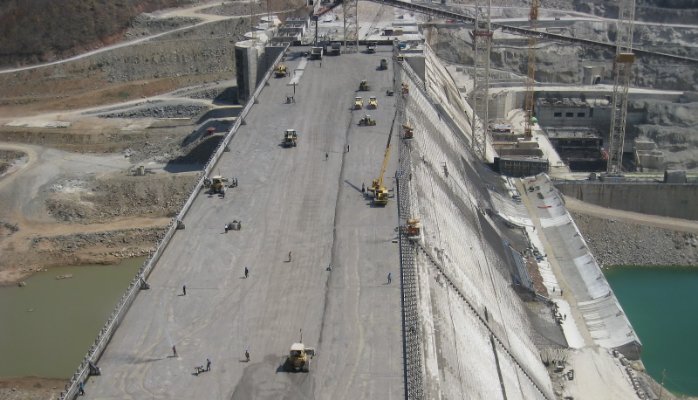 Mass concrete can be defined as any large volume of cast-in-place concrete with dimensions large enough to require measures to cope with the generation of heat and attendant volume change to minimize cracking. Like regular concrete, mass concrete too is primarily composed of cement, aggregate, and water. Additionally, it has pozzolans and other admixtures to improve its characteristics. Proper proportioning of mass concrete mixture is aimed at: 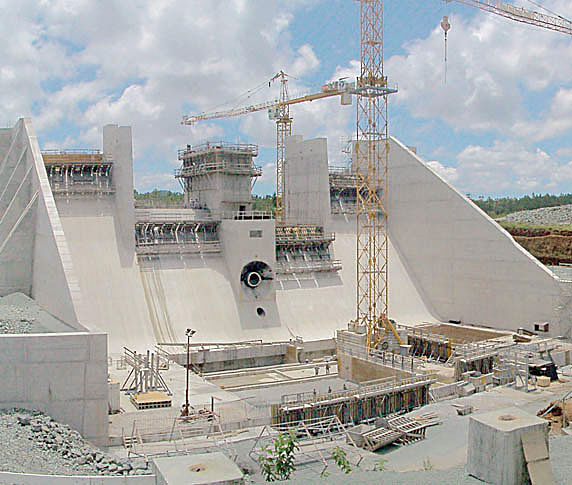 For this purpose, "low heat" Portland cement would always be preferred for massive structures such as dams. Obviously, both economy and low rise in temperature would be achieved by limiting the cement content of mass concrete to as low a value as possible. Aggregate grading has considerable effect on the workability of concrete. Fine aggregate is defined as aggregate passing No. 4 (4.76 mm) sieve. It may be composed of natural grains, manufactured grains obtained by crushing larger size rock particles, or a mixture of the two.

Fine aggregate should consist of hard, dense, durable, and un-coated rock fragments, and should not contain harmful grains of clay, silt, dust, mica, organic matter or other impurities to such an extent that they affect adversely the desired properties of concrete. Coarse aggregate is defined as gravel, crushed gravel, or a crushed rock, or a mixture of these, generally within the range of 4.76 mm to 150 mm in size. Coarse aggregate should also consist of hard, dense, durable, and un-coated rock fragments. Rock which is very fragile or which tends to degrade during processing, transporting, or in storage should be avoided. Further, rocks having absorption greater than 3 per cent or a specific gravity less than 2.5 are not considered suitable for mass concrete.

The shape of the aggregate particles affects workability and, hence, water requirement. Round particles provide best workability. More than 25 per cent of flat (width-thickness ratio greater than 3) and elongated (length-width ratio greater than 3) particles should not be permitted in each size group. Water used for preparing mass concrete mix should neither significantly affect the hydration reaction of Portland cement nor interfere with the phenomena that are intended to occur during the mixing, placing, and curing of concrete. Water which is suitable for human consumption is acceptable for use in mass concrete.

A major problem associated with mass concrete is the probability of high tensile stresses due to generation of heat by the hydration of cement along with subsequent differential cooling. A decrease in temperature of concrete causes volumetric changes resulting in the development of tensile stresses and consequent cracking in the concrete mass. Such cracking in concrete dams is undesirable as it adversely affects their water-tightness, internal stresses, durability, and appearance. Temperature drop is, therefore, controlled by controlling placing temperature, limiting the temperature-rise potential of concrete, controlling lift thickness and placing schedule, and removal of heat through embedded cooling coils. From the considerations of temperature control, the longer interval between successive lifts is preferred provided the ambient temperatures are lower than those of the concrete surfaces while internal temperature is rising.

Presently, it is common practice to pre-cool mass concrete before its placement. Best uniformity of mix is attained when maximum use of ice is made for pre-cooling mass concrete.