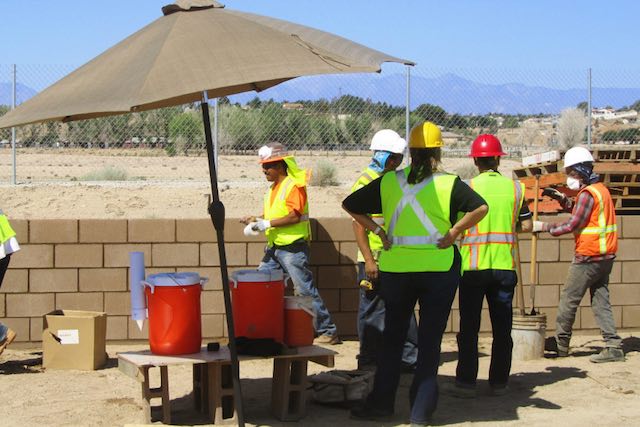 While hot weather conditions are commonly encountered in summer, combinations of high temperatures, winds and low humidity could result in conditions leading to problems with concrete placement and finishing at any time. ACI 305 “Hot Weather Concreting” defines hot weathers as any combination of the following conditions that tends to impair the quality of the freshly mixed or hardened concrete:

The success of many hot-weather concreting operations depends on the steps taken to slow the cement hydration reactions within the concrete and to minimize the rate of evaporation of moisture from the freshly mixed concrete. Potential concrete problems in hot weather are likely to include:

Effects of Hot weather on concrete:

Hot weather imposes the harmful effects on the following properties of concrete:

High temperatures accelerate the hardening of concrete and more water is generally required to maintain workable consistencies. If the water-cement ratio is not maintained by adding additional cement, strength and durability will be reduced. For example, if the temperature of concrete is increased from 50 degrees F (10ºC) to 100 degrees F (38ºC), about 33 pounds (roughly 15 liters) of additional water is needed per cubic yard of concrete to maintain a three-inch slump. If the water content of concrete is increased without increasing the cement content, the strength and other properties of concrete are adversely affected.

High water contents also mean greater drying shrinkage. Furthermore, setting is accelerated which shortens the time within which the concrete can be handled and finished. Curing concrete requires that it be kept damp so that hydration can be completed, therefore, it cannot be allowed to dry too rapidly.

Keeping equipment such as mixers, chutes, wheelbarrows, etc. in the shade or covered with wet burlap will reduce the effect of the sun's heat. Forms, reinforcing steel, and subgrade should be sprinkled with cool water just before the concrete is placed. Wetting down the area cools the surrounding air and increases the relative humidity. This not only reduces the temperature but also minimizes the evaporation of water from the concrete.

Aggregates have a pronounced effect on fresh concrete temperature because they represent 60 to 80 percent of the total weight of concrete. Stockpiles should be shaded from the sun and kept moist by sprinkling. Since evaporation is a cooling process, sprinkling provides effective cooling, especially when the relative humidity is low. Cement temperature has only a minor effect on the temperature of freshly mixed concrete because it represents a relatively small percentage of the total mixture.

Concrete Curing is a hydration process and requires water to be present. Forms should be sprayed with water to keep them damp, or they will absorb part of the mixing water. As soon as the concrete has set sufficiently to prevent marring the surface, it should be covered with straw, burlap, or other materials such as sand and kept moist for several days. Covering with polyethylene plastic sheets or using curing compounds helps in preventing evaporation by air or wind. Anything to prevent rapid dehydration will be helpful.

High ambient temperature cause low relative humidity due to which loss of water from concrete is very high which result in high water requirement for mix preparing.

To control the high concrete temperature following steps may be taken:

The formula to calculate temperature of concrete is given as:

Where Ta, Tc,Tw & Twa and Ma, Mc, Mw, Mwa are temperature and mass of aggregate, cement, water and water content in aggregate respectively. Mi is the mass of ice.

Sometimes ice is used to decrease the temperature of concrete

Measures to be taken during the Hot weather concrete pouring:

Note: For correct proportioning, the ice must be weighed. Cooling with block ice involves the use of a crusher/slinger unit, which can finely crush a block of ice and blow it into the mixer.

11. Keep the slump on the high side( 7.5 to 10 cm). 12. Proper curing as per the project specification 13. Usage of admixtures: Retarding admixtures meeting ASTM C 494, Type D requirements have both water reducing and set retarding properties, and are used widely under hot weather conditions. They can be included in concrete in varying proportions and in combination with other admixtures so that, as temperature increases, higher dosages of the admixture may be used to obtain a uniform time of setting. Their water reducing properties largely offset the higher water demand resulting from increases in concrete temperature. Because water reducing retarders generally increase concrete strength, they can be used, with proper mixture adjustments, to avoid strength losses that would otherwise result from high concrete temperatures (Gaynor et al 1985; Mittelacher 1985 and 1992). Compared with concrete without admixture, a concrete mixture that uses a water reducing and retarding admixture may have a higher rate of slump loss.

Note: The number of the above listed precautions to be taken depends on the type of construction, temperature of the ambient air, low relative humidity, wind speed, concrete temperature and others. Few, or all of the above precaution will be taken at a time based on the neediness.

Problems and Defects in Hardened Concrete

Disadvantages of Concrete in Construction