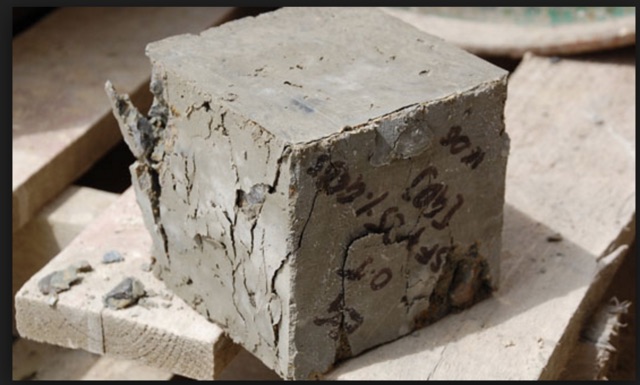 A concrete made from a mixture of lime, sand, and gravel is said to be as lime concrete. It was widely used before the lime was replaced by Portland cement.

Lime as the first cement:

Since long, Lime has been used to make things like plaster and mortar. Lime is usually made by burning of limestone. Chemically; lime itself is calcium oxide (CaO) and is made by roasting calcite (CaCO3) to remove carbon dioxide (CO2). Lime is also called calx or quicklime. Quick Lime is very caustic and can even dissolve human bodies.

When lime is mixed with water, lime slowly turns into the mineral portlandite(dense) in the reaction CaO + H2O = Ca (OH)2. Lime is mixed with an excess of water so it stays fluid, this is called slaking and the lime resulting is called slaked lime. Slaked lime continues to harden over a period of weeks. Lime has to be mixed with sand and other ingredients to take form of slaked lime cement, that can be used as mortar between stones or bricks in a wall or spread over the surface of a wall There, over the next several weeks or longer, it reacts with CO2 in the air to form calcite again(artificial limestone)

Concrete made with lime cement is well known from more than 5000 years old. It was widely used in all over the world. Sign of its usage can be found easily after surveying different archaeological sites. In dry conditions, it works extremely well.

Lime is usually manufactured by burning limestone, in the process driving off carbon dioxide leaving the clinker of calcium oxide and quick lime. When quick lime is slaked with water, it disintegrates into fine grained powder depending on the volume of water added. The pure slaked lime formed in this way is said to be as fat lime. It can be used for construction of masonry but it hardens quickly in air. Masonry buildings that were built in the past by with fat lime are now demolished as there strength is very less than the strength when lime concrete was placed.

Hydraulic lime is one of the advanced form of fat lime. It is manufactured by addition of fat lime with surkhi (clay rich in silicates).Hydraulic lime can be made into satisfactorily mortar that achieves strength similar to that of cement mortar.

The main ingredient of this concrete is slaked lime as binding material. The slaked lime is obtained in various forms as hydrated lime powder, lime putty, slaked lime slurry that is prepared by grinding in suitable Grinding Mills. Slaked lime is first mixed with sand to prepare lime mortar which is then further mixed with coarse aggregates, in suitable proportion. For preparation of lime concrete, first hard impervious level base is prepared by stones or brick pitching.

Then quantity of sand is spread as the horizontal base. Generally lime & sand are taken in ratio of 1:1 to 1:3 by volume. Measured quantity of slaked lime is then added to sand and then mixing is done. In this mixing, water is sprinkled continuously to make the whole mass plastic.

Then the whole mass is allowed to mature for 1 to 3 days. After that coarse aggregates of desired type are used to lay on the prepared hard impervious level surface. After that lime mortar which is made with sand & lime is introduced into the base. Sufficient water is sprinkled over the base and it is cut into the layers and then is turned upside down with the help of spade or shovel until the whole assembly has become uniform.

The base where lime concrete is to be laid is prepared by cleaning, leveling and compacting by ramming properly. The material is laid on prepared foundation bases and rammed manually with steel rammer. During ramming water may be sprinkled if concrete is dry and stiff. After that it is cured for 7 to 14 days.

Lime concrete provides good bases to bear the sufficient loads and also provide certain degree of flexibility. It adjusts very well when it is in contact with surface. Lime concrete also exhibits certain degree of water proofing property and thus prevents subsoil dampness in floors and walls. Lime concrete also exhibits volumetric stability. It can be made easily and can be available at much cheaper rates. It also resists weathering effects and is very durable.

Methods of Transportation of Concrete