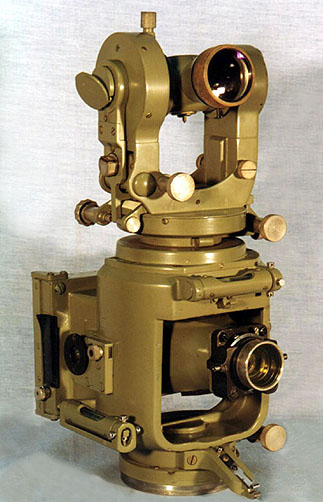 A photo theodolite is a form of ground camera. It is a combination of camera and theodolite and is used for taking photographs and measuring the angles which the rival plane of collimation makes with base line. Both the theodolite and the camera rotate about a common vertical axis. The instrument is used for terrestrial photogrammetry

It should be noted that the pointing of the theodolite is completely independent of that of the camera, but the horizontal circle, which is located on the top of the camera housing, is fixed in such a way that when the circle reading is zero, the optical axes of the theodolite and camera lie in the same vertical plane. This means that all horizontal directions observed with the theodolite can be easily related to the principal point of the photograph.

Not only is the terrestrial camera useful for mapping construction sites at scales as large as 5 ft. to 1 in., but the photographs can be utilised in a suitable instrument for taking off quantities for earthworks or stock-piles and for directly plotting tunnel profiles and other varied uses. At the other extreme the photo-theodolite can be employed for mapping at small scales and even for extending control.