It is the branch of biology which deals with micro organisms which is unclear or cluster of cell microscopic organisms.

Microorganisms are significant in water and wastewater because of their roles in different transmission and they are the primary agents of biological treatment. They are the most divers group of living organisms on earth and occupy important place in the ecosystem. Are called OMNIPRESENT.

1. Classification of bacteria based on Oxygen requirements (ORP)

The heterotrophic bacteria are grouped into three classification, depending on their action toward free oxygen (O4) or more precisely oxygen-reduction potential (ORP) for survival and optimum growth.

2. Classification of Microorganisms by Kingdom:

Microorganisms are organized into five broad groups based on their structural functional differences. The groups are called “Kingdoms”. The five kingdoms are animals, plants, protista fungi and bacteria. 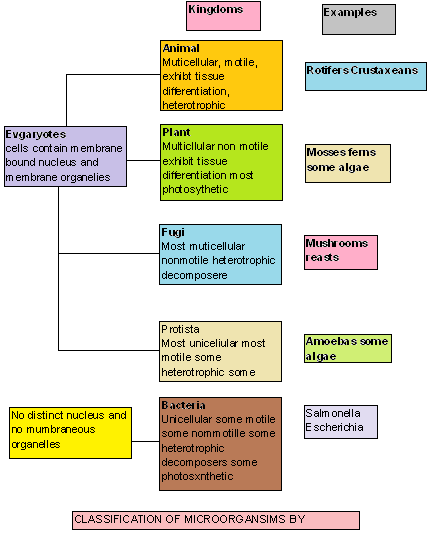 Representative examples and characteristics of differentiation are shown:

3. Classification by their preferred Temperature Regimes:

Each specie of bacteria reproduces best within a limited range of temperatures. Four temperature ranges for bacteria:

The highest population of microorganisms in a wastewater treatment plant will belong to the bacteria. They are single-called organisms which use soluble food. Conditions in the treatment plant are adjusted so that chemosererotrophs predominate. No particular species is selected as best.

The general tern that describes all of the chemical activities performed by a cell is metabolism. Divided into two parts:

Includes all the biochemical processes by which a substrate is degraded to end produces with the release of energy.

Includes all the biochemical processes by which the bacterium synthesizes new chemical compounds needed by the cells to hire and reproduces.

Definition and Types of Chlorination