Precipitation takes place when a body of moisture cools sufficiently for it to become saturated in water droplets and ice crystals, upon condensation. Air may be cooled in a number of ways i.e. By meeting of air masses of different temperature

By coming into contact with a cold object such as ground (mountains). The most important mechanism is uplift of air, as air rises, its pressure decreases, it expands and cools down. Its ability to hold water is reduced to a certain point. The air becomes saturated and condensation occurs. The formation of cloud does not itself result in precipitation as there must be a mechanism to provide a source of inflow of water. In fact some clouds are associated with dry weather or light rain while other clouds are indication of heavy rainfall.

Various forms of precipitation are as follows: 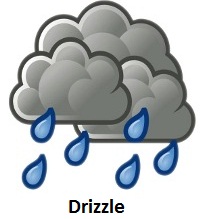 It consists of tiny liquid water drops between 0.1 and 0.5mm diameter. It is also called mist. Drizzle fall from low strata’s and rarely exceeds 1mm/hr. Drizzle is normally produced by low strati-form clouds and stratocumulus clouds. Due to small size, drizzle evaporates before reaching the earth.

Consists of liquid drops mostly > 0.5 in diameter. Rain is reported in three intensities.

It is ice coating formed on exposed surface by freezing of super cooled water deposits by rain or drizzle. Its specific gravity is as high as 0.8 to 0.9.

When rain or drizzle comes in contact with cold ground at around 0° C, the water drops freeze to form an ice coasting called glaze.

It is white opaque deposit of ice granular mass or less separated by trapped air and formed by rapid freezing of super cooled water drops. Its specific gravity may be as low as 0.2 to 0.3.

It is composed of ice crystals formed by the process of sublimation. The average specific gravity of snow is 0.1. The density of freshly fallen snow varies greatly - ranges from 0.06 to 0.15 gm/ cm3 (average density 0.1 gm/cm3).

Bigger particles of snow formed by combination of snow crystals in atmosphere and fall as heavy masses. They may reach several centimeters in dia.

Precipitation in the form of ball of ice produced in convective clouds.

Hailstones may be spherical, conical or irregular in shape and from 5 to 125mm in dia. They are composed of alternative layers of glaze and Rime. Their specific gravity may reach 0.8. The largest hailstone in US fell of size 44cm circumference and 776g weight. 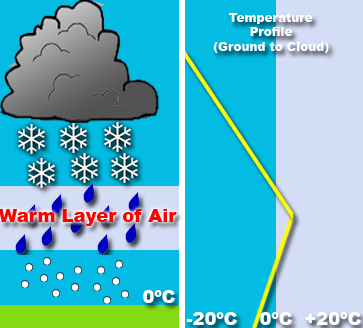 Consists of transparent globular solid grain of ice formed by freezing of raindrops or freezing of largely melted ice crystals fully through a layer of sub-freezed air, near the earth surface. These are simply frozen raindrops.  As it falls toward the ground, it goes through a layer of warmer air somewhere between the cloud and the ground.  If that layer is thick & warm enough, the snowflake melts and becomes a rain drop. That liquid rain drop falls back into colder air (temperature below 0° C or 32° F), and refreezes into a small, hard ice pellet.

Sleet can accumulate on the ground and look like snow, but you cannot make a sleet-man like a snowman! If the cold layer of air near the ground is not thick enough, the rain does not freeze again until it gets to the ground. That is when you have freezing rain!