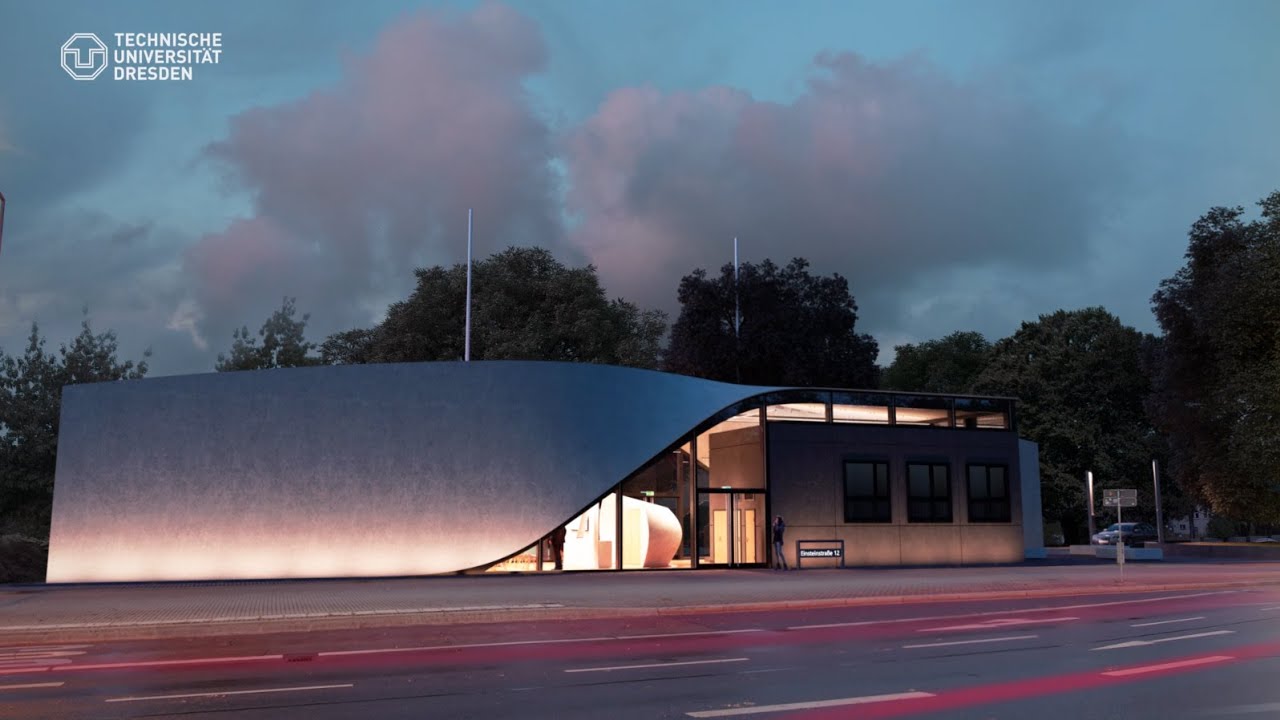 A two-story building locally named Carbonhaus on the campus of Technical University in Dresden, Germany is under construction which will be the first building in the world built entirely on Carbon Reinforced Concrete. The building has a covered area of 2200 Square feet and will be completed with a budget of 5 Million Euros (US$5.63 million).

The building consists of two major portions: a precast “box”; and the “twist,” a double-curved roof that is made up of the lighter-weight and bendable reinforced concrete. This university building will house a classroom, lab, presentation spaces, and a small kitchen. The biggest attraction as well as the engineering marvel of this will be its curved roof as well as 24-meter length of seamless concrete. The design architect of Carbonhaus is Gunter Henn, chairman of Munich-based architecture firm HENN. The project is engineered by Architeckten Ingenieure Batzen (AIB), whereas Assmann Advice + Plan is providing structural planning services.

Manfred Curbach, director of the Institute of Concrete Construction at TU Dresden, where he is a professor, said "When we started publishing the first results on carbon reinforced concrete at that time, we were smiled at. It is nonsense. The topic will be off the table in three years". That was in 1998. Now 22 years later, despite the difficult current situation, the world's first building made entirely of carbon reinforced concrete is being built on the campus of the TU Dresden. "It is a quantum leap in the history of civil engineering" he added.

The reinforced concrete is named as Carbon Concrete Composite and named as C3 or Cube.

What is Carbon-Fiber Reinforced Concrete?

Carbon-fiber reinforced concrete is a composite product that consists of carbon fiber — which provides strength and stiffness and polymers — which hold the fibers together in a kind of matrix. The micro or macrofibers can be either synthetic or natural. The consensus within the industry is that this kind of reinforcement can significantly increase the life of the structure in which the composite is used.

The carbon fiber being deployed for CUBE is produced from petroleum-based polyacrylonitrile, or PAN. It can also be made from lignin, an organic polymer derived from waste material in paper production. TU Munich has been exploring the production of carbon fiber from algae oil.

It offers more durability and is better for the environment than the standard mix of building materials. The carbon-reinforced material provides more resistance to cracking and erosion than conventional steel and concrete building components. The use of the new alternative, however, still faces some regulatory and economic hurdles.

Experts say that because steel and concrete “work in tandem, but not together,” the resulting component continues to be prone to cracking and erosion, to the point where buildings and infrastructure don’t last anywhere near as long as they should. “They are designed for strength, but not durability, and no one is accountable after 10 years of service.”

On the other hand, the weight of carbon reinforcement materials is about one-quarter that of steel, with the same tensile strength. The composite component is more durable and saves up to 70% in greenhouse gas emissions. Though it could take 20 years to get mainstream and would require regulations but once in effect it would help accelerate the decline of CO2.

Carbon concrete can, however, not only be used in the strengthening or refurbishment of bridges or structures. It paves the way for the construction industry to develop an entirely new way of building and living. Carbon concrete enables the interior walls of buildings to consist of panels only a few centimeters thick, thus providing new design possibilities that are characterized by slenderness, lightness and esthetic principles. Potential applications thus extend across the entire spectrum of construction engineering – whether refurbishment or new construction.

Steps for How to Construct a Stone Wall