The physical characteristics of wastewater include those items that can be detected using the physical senses. They are temperature, color, odor, and solids.

Temperature of wastewater varies greatly, depending upon the type of operations being conducted at your installation. Temperature of sewage the sewage is slightly more than that of water, because of the presence of industrial sewage. The temperature changes when sewage becomes septic because of chemical process. The lower temperature indicates the entrance of ground water into the sewage.

Color; of fresh sewage is yellowish grey to light brown. While that of the septic is black or dark due to oxidation of organic matter.

Odor; smell of the fresh sewage is oily or soapy while the septic sewage develops an objectionable. H2S is the major source of pollution.

All matter except the water contained in liquid materials is classed as solid matter. The usual definition of solids, however refers to; “the matter that remain as residual upon evaporation and drying at 103 ± 20C”. 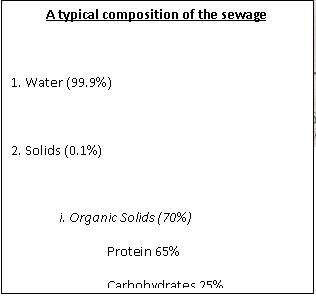 All solids that burn or evaporate at 500°C to 600°C are called volatile solids. These solids serve as a food source for bacteria and other living forms in a wastewater treatment plant. Most organic solids in municipal waste originate from living plants or animals.

Those solids that do not burn or evaporate at 500°C to 600°C, but remain as a residue, are called fixed solids. Fixed solids are usually inorganic in nature and may be composed of grit, clay, salts, and metals.

The term “turbid” is applied to water/wastewater containing suspended matter or in which the visual depth is restricted. 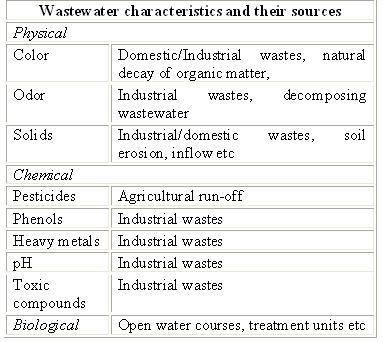 Sewage contains both organic and inorganic chemicals in addition to various gases like H2S, CO2, CH4, and NH3 etc that are formed due to the decomposition of sewage. The chemical characteristics of wastewater of special concern are pH, DO (dissolved oxygen), oxygen demand, nutrients, and toxic substances.

PH is used to describe the acid or base properties of water solutions. The pH of sewage is initially high and drops when the sewage becomes septic but becomes increases again with the treatment processes.

Wastewater that has DO is called aerobic or fresh. The solubility of oxygen in fresh water ranges from 14.6 mg/L at 0oC to about 07 mg/L at 35oC at 1.0 atm pressure.

It is the amount of oxygen used by bacteria and other wastewater organisms as they feed upon the organic solids in the wastewater.

BOD is defined as the amount of oxygen required by the bacteria while stabilizing decomposable organic matter under aerobic condition. It is written as by BOD or BOD520. “It is the amount of oxygen required by aerobic bacteria to decompose/stabilized the organic matter at a standard temperature of 20oC for a period of 05 days”. For domestic sewage 05 days BOD represents approx. 2/3 times of demand for complete decomposition.

Are life-supporting nitrogen and phosphorus.

Toxic Chemicals; most industrial use various types of toxic chemicals, the discharges of which can be harmful to wastewater treatment processes.

The three biological organisms present in wastewater are bacteria, viruses, and parasites. 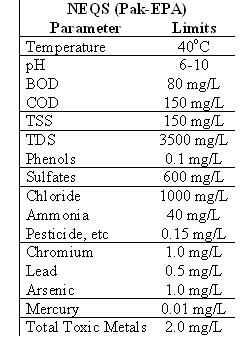 Sewage consists of vast quantities of bacteria, most of which are harmless to man. However, pathogenic (disease-causing) organisms such as typhoid, dysentery, and other intestinal disorders may be present in wastewater. The bacteria in raw swage may be expected to in the range from 500, 000 to 5,000,000 per mL. These bacteria are responsible for the decomposition of complex compounds to stable compounds with the help of some extracellular and intracellular enzymes. Depending upon the mode of action of bacteria may be divided into the following three categories;

How to Estimate the Design Flow for a Sanitary Sewer