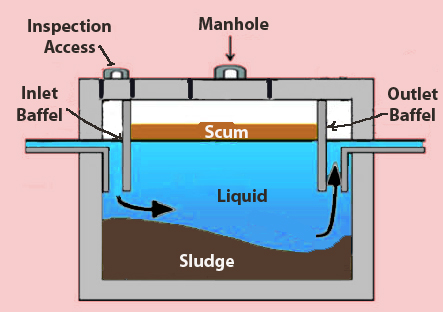 The septic tank is an arrangement in which a tank of some suitable material like concrete, fiberglass, brick masonry etc is buried in the ground to collect the waste.

Septic tanks are now a day’s extensively used in most parts of the world and people are trying to adopt this system of removing human excreted waste.The working principal of septic tank is quite simple the bigger particles that comes with the waste water settles down at the bottom of the tank forms sludge, the greasy particles forms a layer at the top and floats there called scum and the water portions remain in between the two layers as shown in the above figure.

The basic aim is to separate the solid particles (sludge and scum) from the waste water so that it becomes sufficiently clean to be treated for further processing. Sometimes the sludge starts accumulating at the entrance of the septic tank and may cause it to function improperly so its recommend to give certain longitudinal slope to the tank so that the sludge could be moved to the opposite side of the septic tank. For septic tank maintenance and escape of gases manhole, ventilation and inspection is also provided for better performance of septic tank.

Design of Septic tank is to calculate its dimensions (length, depth and width) using daily flow used by the individuals. There are different methods used for designing of septic tanks such as

Here we will be doing a design example using British method.

A Septic Tank of Capacity 3.26 cubic meters needs to be designed