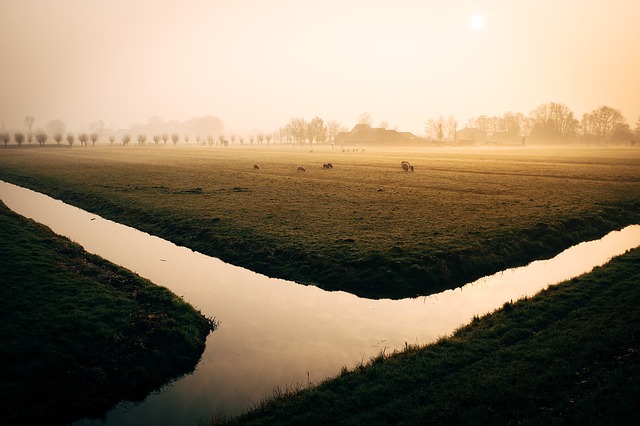 There are three broad classes of irrigation systems:

The pressurized systems include sprinkler, trickle, and the array of similar systems in which water is conveyed to and distributed over the farmland through pressurized pipe networks. There are many individual system configurations identified by unique features (centre-pivot sprinkler systems).

Gravity flow systems convey and distribute water at the field level by a free surface, overland flow regime. These surface irrigation methods are also subdivided according to configuration and operational characteristics.

Irrigation by control of the drainage system, sub-irrigation, is not common but is interesting conceptually. Relatively large volumes of applied irrigation water percolate through the root zone and become a drainage or groundwater flow. By controlling the flow at critical points, it is possible to raise the level of the groundwater to within reach of the crop roots. These individual irrigation systems have a variety of advantages and particular applications.

Irrigation systems are often designed to maximize efficiencies and minimize labour and capital requirements. The most effective management practices are dependent on the type of irrigation system and its design. For example, management can be influenced by the use of automation, the control of or the capture and reuse of runoff, field soil and topographical variations and the existence and location of flow measurement and water control structures.

Questions that are common to all irrigation systems are when to irrigate, how much to apply, and can the efficiency be improved. A large number of considerations must be taken into account in the selection of an irrigation system. These will vary from location to location, crop to crop, year to year, and farmer to farmer.

Compatibility of the irrigation systems:

The irrigation system for a field or a farm must be compatible with the other existing farm operations, such as land preparation, cultivation, and harvest.

Restrictions on irrigation system selection due to topography include:

Under gravity irrigation, water is distributed by means of open canals and conducts with out pressure. Gravity irrigation methods are less expensive, but requires more skill and experience to achieve re-scannable efficiency. This method also requires that the land to be irrigated should have a flatter slope, other wise the cost of land leveling and preparation at times be come very high. Gravity irrigation method. Includes furrow, boarder, basin, wild- flooding and corrugation.

In this method of surface irrigation, water is applied to the field by furrow which are small canals having a continuous our nearly uniform slope in the direction of irrigation. Water flowing in the furrow into the soil spreads laterally to irrigate the area between furrows. The rate of lateral spread of water in the soil depends on soil type.i.e. For a given time, water will infiltrate more vertically and less laterally in relatively sandy soils than in clay soil.

Where the land grade is less than 1% in the direction of furrow, striate graded furrows may be adapted. The grade can be as much as 2 to 3% depending on the soil type and the rainfall intensity, which affects erosion. When field sloped is too steep to align the furrows down the slope, control furrows which run along curved routed may be used. Spacing of furrows depends on the crop type and the type of machinery used for cultivation and planting. Length of furrows depends largely on permeability of the soil, the available labor and skill, and experiences of the irrigation. Flow rates are related to the infiltration to the rate of the soil.

Longitudinal slope of furrow depends up on the soil type, especially its errodability and the velocity of flow. Slope may be related to discharge as follows.

The farms are divided into number of strips of 5 to 20 meters wide and 100 to 400 meters long. Parallel earth bunds or levees are provided in order to guide the advancing sheet of water. Recommended safe limits of longitudinal slope also depends on the soil texture:

Large stream of water is applied to almost level and smaller unit of fields which are surrounded by levees or bunds. The applied water is retained in the basin until it filtrates. Soil type, stream size and irrigation depth are the important factors in determining the basin area.

Water is applied all over the field especially, before plowing for soil that can't be plowed when dry. Under closed conduit- there are two types of irrigation

It is mostly used for young growth, to humid the atmosphere, for soil compaction( specially for sandy loam soils before planting, for land having up and down slope and used to wash out plant leaves especially in dusty area.

Sprinkler irrigation offers a means of irrigating areas which are so irregular that they prevent use of any surface irrigation methods. By using a low supply rate, deep percolation or surface runoff and erosion can be minimized. Offsetting these advantages is the relatively high cost of the sprinkling equipment and the permanent installations necessary to supply water to the sprinkler lines. Very low delivery rates may also result in fairly high evaporation from the spray and the wetted vegetation. It is impossible to get completely uniform distribution of water around a sprinkler head and spacing of the heads must be planned to overlap spray areas so that distribution is essentially uniform

It minimizes the loss of water by deep percolation below the root zone or by evaporation from the soil surface. Drip irrigation is not only economical in water use but also gives higher yields with poor quality water.