Types of Flows and Concepts of Flows

The type of flow in which the particles move in a straight line in the form of a thin parallel sheets is known as the Laminar flow. Laminar flow denotes a steady condition where all stream lines follow parallel paths. Under this condition, the dye will remain easily identifiable as a solid core. 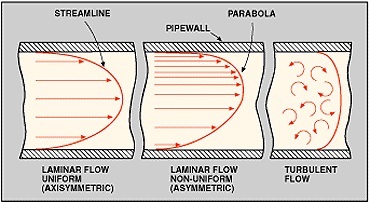 The type of flow in which the particles move in a zigzag pattern is known as the turbulent flow. Turbulent flow denotes as unsteady condition where stream lines interact causing shear plan collapse and mixing occurs. As the flow rate is increased, the transition from laminar to turbulent flow is a gradual process. This zone of change is defined as transitional flow. This will appear as a wandering dye stream prior to dispersion as turbulence occurs.

When the flow changes from laminar to turbulent or vice versa a disturbance is created, it is called as the transitional flow.

When flow is exposed to the environment whether in pipes or open then it is called as the open channel flow.

When flow is not directly exposed to the environment then it is called as the closed or pipe flow.

There are two ways to categorize a flow:

When liquid flows there are three forces acting on it:

It is the ratio of inertial force to the viscous force. Mathematically it is given as

Then flow will be laminar.

Then flow will be transitional.

Then flow will be turbulent.

Procedure of the Experiment: