If water is flowing through a channel and it is stopped abruptly i.e its momentum is broken so a pressure surge or wave results, this effect produced is called water hammer or hammer blow. This effect can be produced in any fluid. When a flow is stopped backwater effect is produced in which a wave of water moves against the flowing water.

Water hammering  is caused by a pressure or shock wave that travels through the pipes, generated by a sudden stop in the velocity of the water, or a change in the direction of flow. If the pipe is suddenly closed at the outlet, the mass of water before the closure is still moving forward with some velocity, building up a high pressure and shock waves. A common example of water-hammer that takes place in most homes everyday e.g. Simply turning off a shower quickly will send a loud thud through the house. 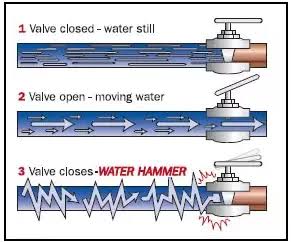 Water hammering Phenomenon can cause failure of fittings or burst pipes. Water hammer can cause the pipe to break if the pressure is high enough. When a valve in a pipe is closed, the water downstream of the valve will attempt to continue flowing, creating a vacuum that may cause the pipe to collapse or implode.

The first to successfully investigate the water hammer problem was the Italian engineer Lorenzo Allievi which water hammer can be analysed by two different approaches, rigid column theory which ignores compressibility of the fluid and elasticity of the walls of the pipe, of by full analysis including elasticity.

Generally, the sources that cause the water-hammer are the pressure in pipe, velocity flow in pipe, and sudden change of velocity flow. There are other sources that may affect the waveform predicted by classical water hammer theory include visco-elastic behavior of the pipe-wall material, blockage and leakage in addition to the unsteady friction, cavitations and fluid structure interaction. These discrepancies are based on the derivation of the water hammer equations for the liquid unsteady pipe flow.