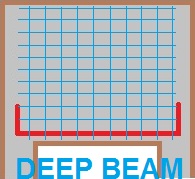 Deep beams are structural elements loaded as simple beams in which a significant amount of the load is carried to the supports by a compression force combining the load and the reaction. As a result, the strain distribution is no longer considered linear, and the shear deformations become significant when compared to pure flexure.

Floor slabs under horizontal load, short span beams carrying heavy loads, and transfer girders are examples of deep beams. Deep beam is a beam having large depth/thickness ratio and shear span depth ratio less than 2.5for concentrated load and less than 5.0 for distributed load. Because the geometry of deep beams, their behavior is different with slender beam or intermediate beam.

The followings are the major different of 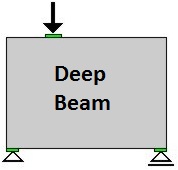 deep beam element compared with simple beam based on the design assumption, as follows:

The Design is based on the ACI Ultimate Strength Design Method and applies to those flexural members having a clear span to depth ratio of less than 4.0. The flexural reinforcement is designed taking into account the reduced lever arm due to the non-linearity of the strains' distribution.

Deep beams play a very significant role in design of mega and as well as small structures. Some times for architectural purposes buildings are designed without using any column for a very large span. In such case if ordinary beams are provided they can cause failure such as flexural failure.