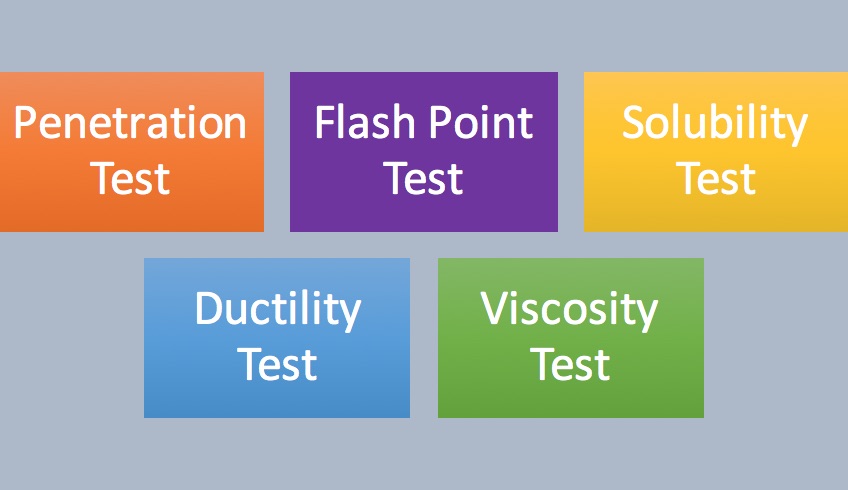 Experience in using bitumen in engineering projects has led to the adoption of certain test procedures that are indicative of the characteristics that identify adequate performance levels. Some of the tests have evolved with the development of the industry and are empirical methods. Consequently it is essential that they are carried out in strict compliance with the recommended procedures if they are to be accurate measurements of the bitumen's properties.

The penetration test is one of the oldest and most commonly used tests on asphalt cements or residues from distillation of asphalt cutbacks or emulsions. The standardized procedure for this test can be found in ASTM D5 [ASTM, 2001]. It is an empirical test that measures the consistency (hardness) of an asphalt at a specified test condition.

Procedure of Penetration Test on Bitumen:

The penetration test can be used to designate grades of asphalt cement, and to measure changes in hardness due to age hardening or changes in temperature.

The flash point test determines the temperature to which an asphalt can be safely heated in the presence of an open flame. The test is performed by heating an asphalt sample in an open cup at a specified rate and determining the temperature at which a small flame passing over the surface of the cup will cause the vapors from the asphalt sample temporarily to ignite or flash. The commonly used flash point test methods include

Procedure for Solubility test on Bitumen

In the standard test for bitumen content (ASTM D4), a small sample of about 2 g of the asphalt is dissolved in 100 ml of carbon disulfide and the solution is filtered through a filtering mat in a filtering crucible. The material retained on the filter is then dried and weighed, and used to calculate the bitumen content as a percentage of the weight of the original asphalt. Due to the extreme flammability of carbon disulfide, solubility in trichloroethylene, rather than solubility in carbon disulfide, is usually used in asphalt cement specifications. The standard solubility test using trichloroethylene is designated as ASTM D 2042.

Unfortunately, trichloroethylene has been identified as a carcinogen and contributing to the depletion of the earth’s ozone layer. The use of trichloroethylene will most likely be banned in the near future. There is a need to use a less hazardous and non-chlorinated solvent for this purpose. Results of several investigations have indicated that the solvent n-Propyl Bromide appears to be a feasible alternative to trichloroethylene for use in this application.

The ductility test (ASTM D113) measures the distance a standard asphalt sample will stretch without breaking under a standard testing condition (5 cm/min at 25 °C). It is generally considered that an asphalt with a very low ductility will have poor adhesive properties and thus poor performance in service. Specifications for asphalt cements normally contain requirements for minimum ductility.

The most commonly used viscosity test on asphalt cements is the Absolute Viscosity Test by Vacuum Capillary Viscometer (ASTM D2171).