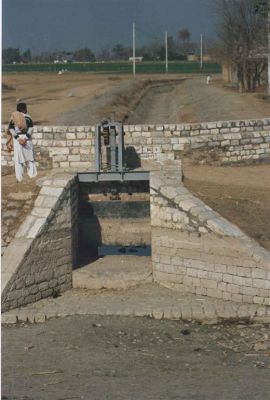 For the purpose of regulating the supplies entering the offtaking channel from the parent channel, abutments on either side of the regulator crest are provided. Piers are placed along the regulator crest at regular intervals. These abutments and piers have grooves (at the crest section) for the purpose of placing planks or gates. The supplies into the off-taking channel are controlled by means of these planks or gates. The planks are used for small channels in which case manual handling is possible. The span of hand-operated gates is also limited to 6 to 8 m. Mechanically-operated gates can, however, be as wide as 20 m.

An off taking channel tends to draw excessive quantity of sediment due to the combined effects of the following:

Concentration of sediment in lower layers can be increased by providing smooth bed in the parent channel upstream of the off taking point. The smooth channel bed reduces turbulence which keeps sediment particles in suspension. In addition, steps which accelerate the flow velocity near the banks would also be useful. It should also be noted that the alignment of the off-taking channel also affects the sediment withdrawal by the off taking channel. Hence, the alignment of the offtaking distributary channel with respect to the parent channel needs careful consideration. The angle of off take may be kept between 60° and 80° to prevent excessive sediment withdrawal by the offtaking channel. For all important works, the alignment of off-taking channels should be fixed on the basis of model studies.